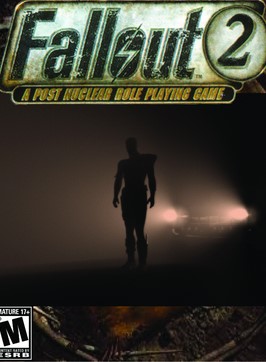 Fallout 2: A Post Nuclear Role Playing Game is a turn-based role-playing open world video game developed by Black Isle Studios and published by Interplay Productions in September 1998. While featuring a considerably larger game world and a far more extensive storyline, it mostly uses similar graphics and game mechanics to those of Fallout.

The game's story takes place in 2241, 80 years after the events of Fallout and 164 years after the war. It tells the story of the original hero's descendant and their quest to save their primitive tribe from starvation by finding an ancient environmental restoration machine known as the Garden of Eden Creation Kit (GECK).

The game was well-received by critics, with praise directed at the gameplay, storyline, and worthiness as a successor to the original Fallout, while criticism was directed at the frequent bugs and lack of improvement over the first game.

Fallout 2 is a role-playing open-world video game. The player is free to move at will until they enter into combat. Combat gives them a number of action points to move, fire, check their equipment, reload and the like. When a player uses up all of their action points, they end their turn and enemies start theirs. If the player survives unharmed, he or she has their action points restored. Injuries and poisons can reduce the number of action points available both in a single term and semi-permanently, until combat ends and the player can be treated. Combat and completion of jobs or quests reward the player with experience points with which they can level up their characters and apply beneficial perks to become more suited to the dangerous post-apocalyptic world. General gameplay consists of traveling and interacting with local inhabitants and organizations to complete goals and aid or inhibit the NPCs. The player's actions dictate what future story or gameplay opportunities are available. Mature themes such as alcohol consumption, drug usage, and sex are present.

Organized crime, prostitution, and slavery are major elements of the setting. Character creation is based on the SPECIAL role-playing system.

In 2241, the primitive town Arroyo suffers the worst drought on record. Faced with the calamity, the village elder asks the direct descendant of the Vault Dweller, referred to as the Chosen One, to perform the quest of retrieving a Garden of Eden Creation Kit (GECK) for Arroyo. The GECK is a device that can create thriving communities out of the post-apocalyptic wasteland. The player, assuming the role of the Chosen One, is given nothing more than the Vault Dweller's jumpsuit, a RobCo PIPBoy 2000, a Vault 13 water flask, a spear and some cash to start on their mission.

The Chosen One eventually finds Vault 13, the supposed location of a GECK, devoid of the majority of its former human inhabitants and instead inhabited by intelligent Deathclaws. The Chosen One then returns to find their village captured by the remnants of the United States government known as the Enclave. The Enclave often terrorizes the inhabitants of continental United States with their supreme arsenal of advanced technology. The Chosen One, through various means, activates an ancient oil tanker and engages its autopilot, thus allowing them to reach the Enclave's main base on an offshore oil rig. It is revealed that the dwellers of Vault 13 were captured as well, to be used as test subjects for Forced Evolutionary Virus (FEV). Vault 13 was supposed to be closed for 200 years as part of a government experiment, making them perfect test subjects. The Enclave modified the Forced Evolutionary Virus into an airborne disease, designed to attack any living creatures with mutated DNA. With all genetic impurities removed, the Enclave (who remain protected from radiation) could take over. The Chosen One frees both their fellow villagers from Arroyo and the Vault 13 dwellers from Enclave control and subsequently destroys the Enclave's oil rig, killing the President of the United States (President Richardson) as well as a genetically modified Secret Service enforcer named Frank Horrigan. In the end, the inhabitants of Vault 13 and the Arroyo villagers create a new prosperous community with the help of the GECK.