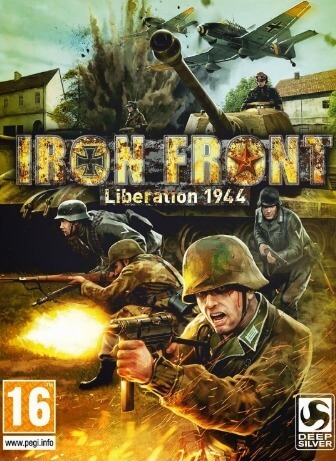 Iron Front: Liberation 1944 is a tactical shooter video game set in World War II Eastern Front. It features both German and Soviet single-player campaigns. The game was developed by X1 Software and AWAR on Bohemia Interactive's Real Virtuality engine. It was released May 25, 2012 for Microsoft Windows.

Iron Front: Liberation 1944 is set in Southern Poland during Soviet summer offensive. The single player campaign can be played from either German or Soviet perspective. The Soviet campaign focuses on breaking through enemy's defenses. On the German side, the mission is to slow down the advance of the Soviet army. Campaigns start with infantry action but later on the player gets to control tanks and planes. These include for example Panzerkampfwagen IV, Königstiger, IS-2, Focke Wulf 190, Stuka and Petlyakov PE-2.

The multiplayer side includes both co-operative missions and player vs. player missions such as Capture the Flag, Deathmatch, Attack and Defense and Blitzkrieg.

The game also includes a comprehensive and extensive mission editor, enabling players to create their own missions and share them online. Modding possibilities in Iron Front: Liberation 1944 are more restricted compared to its parent game ARMA 2. Addons and mods must be released with consent of developers as a free or paid DLC.

Iron Front: Liberation 1944 received mixed reviews from critics upon release. On Metacritic, the game holds a score of 55/100 based on 20 reviews, indicating "mixed or average reviews."