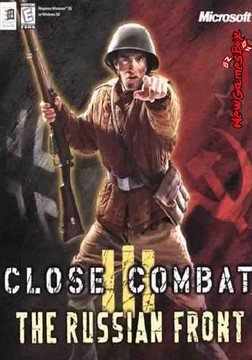 Close Combat III: The Russian Front is the third game of the Close Combat universe. It was highly acclaimed by many organizations, such as GameSpot, IGN, and Computer Games Magazine. It revolves around the Eastern Front during World War II, and takes players from the invasion of the Soviet Union to the final battle for Berlin in 1945.

Battles follow the general pattern of the Close Combat series. Apart from a difficulty slider, there are realism settings which disable the fog of war, unit initiative, difficulty of access to enemy info, etc.

The Grand Campaign follows the Eastern Front from the German invasion of the Soviet Union (Operation Barbarossa), to Stalingrad and ultimately Berlin. Players can pick either side.

In the United States, Close Combat III sold 45,438 copies during 1999. Author James Dunnigan reported that it was the year's best-selling wargame. According to Marc Dultz of CNET Gamecenter, the title was profitable and achieved total sales of "well over 100,000 units" by April 1999.

The editors of PC Gamer US presented Close Combat III with their 1999 "Best Wargame" prize. They hailed it as the "strongest Close Combat title yet", and wrote that it "vividly recreates the fluidity and chaos of real combat without compromising playability." The Academy of Interactive Arts & Sciences and IGN both nominated Close Combat III as their pick for 1998's best strategy game, but these prizes went to Sid Meier's Alpha Centauri and StarCraft, respectively.