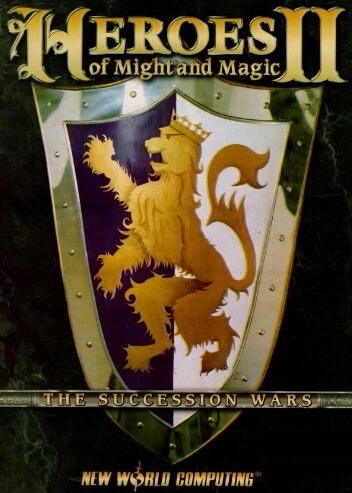 Heroes of Might and Magic II: The Succession Wars is a turn-based strategy video game developed by Jon Van Caneghem through New World Computing and published in 1996 by the 3DO Company. The game is the second installment of the Heroes of Might and Magic series and is typically credited as the breakout game for the series. Heroes II was voted the sixth-best PC game of all time by PC Gamer in May 1997.

An expansion pack, The Price of Loyalty, was released in 1997. Later, 3DO bundled Heroes II and its expansion pack in one box, released as Heroes of Might and Magic II Gold in 1998.

For the most part, Heroes of Might and Magic II is largely a graphical overhaul to the first game. Gameplay in both games is along the 4X genre of strategy games, in that the player builds up their kingdom from the ground up, securing resources, stronger armies, better generals, and then uses those assets to find and defeat opponents through capturing their castles and defeating their armies. Aside from the updated look, Heroes II added many new features that would become staples in the Heroes of Might and Magic franchise. Heroes II added the Necromancer and Wizard factions, joining the original four factions (Knight, Barbarian, Sorceress, and Warlock) from the first game. These two new factions also come with an army of creatures and a themed town that ties the faction together, and the six are divided down the middle to have 3 "good" and 3 "evil" factions.

Each hero still retains the 'primary skill' system from Heroes I but now can also learn secondary skills, giving each hero the ability to become more diverse as they gain experience. Each hero can possess up to eight different secondary skills and once gained, a skill can be developed from Basic to Advanced and Expert levels. For example, the Wisdom skill allows a hero to learn spells of level 3 and higher, while the Logistics skill increases the hero's movement ability over land. In Heroes I, heroes had a single, fixed, special ability according to their class. The magic system was overhauled in Heroes II. Heroes I had used a memorization system in which each spell could be cast a certain number of times before being exhausted, where you had to return to a guild to relearn the spell. Heroes II uses a magic point system that allows the player to apportion spell use as needed, while the varying point cost of different spells maintains balance. Another major feature introduced in Heroes II is the ability to upgrade certain army units, granting them improved statistics and, in some cases, important abilities.

Lastly, Heroes II added more scenarios to the game and a proper campaign, where the player chooses the good or evil side and plays a series of scenarios using the three factions of that side. Victories in certain scenarios give the player lasting bonuses that carry over to future scenarios, and the player can choose a starting bonus before each scenario starts, based on what strategy they take.

The canonical ending of Heroes I results in Lord Morglin Ironfist's victory. In the following years, he has successfully unified the continent of Enroth and secured his rule as king. Upon the king's death, his two sons, Archibald and Roland, vie for the crown. Archibald orchestrates a series of events that lead to Roland's exile. Archibald is then declared the new king, while Roland organizes a resistance. Each alignment is represented by one of the game's two campaigns. Archibald's campaign features the three "evil" town alignments, while Roland's campaign features the three "good" town alignments.

If Archibald is victorious, Roland's rebellion is crushed, and Roland himself is imprisoned in Castle Ironfist, leaving Archibald the uncontested ruler of Enroth. The canonical ending, however, results in Roland's victory, with Archibald being turned to stone by Roland's court wizard, Tanir. This event is referenced later in Might and Magic VI: The Mandate of Heaven, when Archibald is freed of the spell. He goes on to be a significant NPC in Might and Magic VII: For Blood and Honor.

Next Generation reviewed the Macintosh version of the game, rating it three stars out of five, and stated that "as role-playing games are few on the Mac, HM&MII, with its mix of character and Warcraft-like game elements is a welcome addition."

All games from the serie "Heroes of Might and Magic"

(0) Comments on "Heroes of Might and Magic II Full Version"