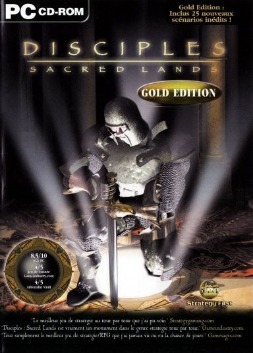 Disciples: Sacred Lands is a turn-based PC strategy game published by Strategy First in 1999. Set in a fantasy world known as the Sacred Lands, it depicts a battle for dominance between four races of the world of Nevendaar: The Empire (humans), the Mountain Clans (dwarves) the Legions of the Damned (demons), and the Undead Hordes (undead).

Gameplay consisted of three major components: The Capital City, where the player recruited units, constructed buildings, and researched spells, The Adventure Map, where the player led Heroes and their parties to explore the land, and the Battle Screen, where battles were fought whenever hostile parties met on the adventure map.

The game has many similarities between Heroes of Might And Magic series; like having a leader, creature slots, city improvements, adventure map with resources and hostile creatures along with the turn-based gameplay.

Small squads with Experience: As opposed to the rival Heroes of Might and Magic franchise, armies in Disciples were not composed of 'stacks' but of small groups of individual units which could only be recruited at the lowest level and would upgrade as they gained experience.

Fixed battle positions: The battles were not fought on a 'map' where units could move about. They had specific stations, but their representation on a plane was purely symbolic, and they could attack any enemy targets (although there were restrictions about ranks and melee attacks), similar to the battle system in tactical RPGs.

Distinctive Art style: The graphics and art in Disciples, both computer and hand-drawn, have always had a very distinctive style to them, with very dark browns and sombre colours, baroque details, and skewed proportions. The overall atmosphere of the game is greatly enhanced by the characteristic graphics.

The game received "favorable" reviews according to the review aggregation website GameRankings.

All games from the serie "Disciples"