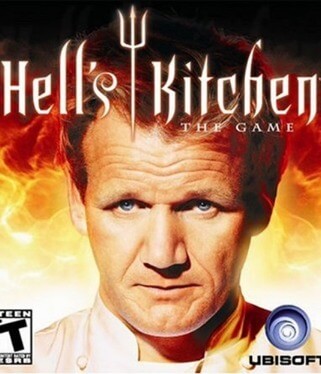 Hell's Kitchen is a time management cooking video game based on the reality competition show of the same name. It was developed by Ludia and published by Ubisoft. It features the host of the show, Gordon Ramsay as the A.I. and places you as a chef under his guidance, while serving customers at the restaurant. It was initially released on September 9 2008, on the Nintendo DS the Nintendo Wii, Microsoft Windows, iOS and Mac OS.

The game was neither a success nor a failure, with it being praised for the enjoyment, but scolded for the reported poor controls and the short length. Ludia conceived the game after the release of its video game version of 'The Price Is Right' and shortly after 'Hell's Kitchen' was released, it was followed by Ludia's next game, 'Where's Waldo? The Fantastic Journey'.

There are two basic modes to Hell's Kitchen, Career and Arcade. In Career mode, the player builds their diner into a five-star, prestigious restaurant. As their rank increases, so do the star rating, recipes and difficulty. Career mode takes place over 36 days, in which the player can earn 5 unique ranks from Dishwasher, Apprentice, Junior Cook, Cook and Senior Chef. In levels the player is rated on a scale of 0-5 stars; if they get 0 stars, they lose the round and Ramsay exclaims "Do not touch another thing in this kitchen!". The game mainly focuses on quality of food and is a used to calm impatient customers. After completing each level, Ramsay awards the player with a free recipe from his own with 35 in total. The jobs completed in the game include cooking, serving, waiting and showing people to tables.

There are also Kitchen Tests that take place every Monday. In these tests, the player has to complete a challenge from Ramsay and use both Team Red and Team Blue kitchens (it is possible to cook two meals simultaneously).

In arcade mode, the player must complete every recipe in time. If the player fails this, Ramsay will become infuriated and close the restaurant.

Despite Ramsay's choice of words in real life in-game he does not swear, but still, in-fact, abuses the player for failing a task.

The game was estimated to coincide with the fourth season of the TV show, Hell's Kitchen in 2008.

When promoting the game, Tony Key, the vice president of marketing and sales praised the game's development and the involvement of Gordon Ramsey with the game.

After release, some players wanted a less tame "Hell's Kitchen" game and in response, Ludia released a limited "Uncensored" version for download and was only available until the finale of the show, in July, 2008.