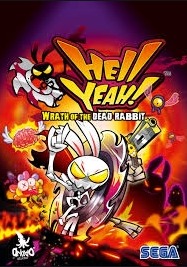 The game puts a player in control of Ash, the prince of Hell, as he sets out across Hell on a self-imposed quest to restore his dignity by killing a number of monsters. He accomplishes this with the use of a large circular-saw blade jetpack that serves as both his primary weapon and his main mode of transportation. Hell Yeah! Wrath of the Dead Rabbit received mixed reviews upon its release. The game was praised for its visuals, but widely criticized for its control scheme.

Ash, a skeletal rabbit and the prince of Hell, has inherited the role of ruler of Hell from his father. After a photographer takes a picture of Ash playing with a rubber duck in the bathtub, Ash sets out to kill the 100 monsters that have seen the photo, to restore his image. The world of Hell Yeah! Wrath of the Dead Rabbit has several zones with different visual styles, including "haunted caves, science labs, casinos and spaceships full of talking animals". The player navigates these zones by traveling on a large buzz-saw-like circular blade that can cut through the environment, can fire a variety of projectile weapons, and is equipped with a jet pack. Ash is assisted in his quest by his butler, Nestor, a top hat-wearing Octopus.

Hell Yeah! Wrath of the Dead Rabbit is a side-scrolling platformer. A player controls Ash, who jumps around platforms on a series of seven levels separated by doors and attempts to kill 100 individually named monsters. As the monsters are killed, more doors to new areas are unlocked. The combat uses twin-stick shooter controls, in which movement is controlled by one thumbstick or set of keys, and firing weapons is controlled by the other thumbstick or another set of keys. The player fights the monsters using a variety of projectile weapons, and can purchase additional weapons. Monsters can also be killed by cutting into them with the saw blade. To finish off any of the 100 monsters, the player must perform a quick mini-game, which unlocks a death animation unique to each monster. Failing the mini-game will result in damage to Ash and the monster will regain some life. Aside from the 100 named monsters, levels are also filled with traps and weaker, unnamed monsters that reappear each time the player re-enters that level.

Hell Yeah! Wrath of the Dead Rabbit received mixed reviews upon its release. Gaming websites were sharply divided over the game. Eurogamer and Official Xbox Magazine (UK) both gave Hell Yeah! a relatively high score of 8 out of 10, while IGN and GameSpot gave the game the low scores of 4.9 and 4 out of 10, respectively. The console versions of Hell Yeah! were significantly better received than the PC version, with the game receiving a Metacritic score of 71 for the Xbox 360 and a 62 for the PC. Critics praised the game's visuals, with Lawrence Sonntag of Inside Gaming Daily writing that "every level is bizarre but expertly colored, vibrant, and filled with high-resolution assets", and that the monsters are "what you might find in a second grader's notebook – doodles of ridiculous monsters, only brought to life with impressive talent and animated in HD". Tom Bramwell of Eurogamer wrote that the game is "absolutely gorgeous, a delicious feast of tasty animation drowning in buttery detail"

The game's control scheme, on the other hand, received almost universal criticism. Greg Miller of IGN stated that "The platforming is plagued by floaty controls and the inability to use the D-Pad.", while Jim Sterling of Destructoid called the controls "unsavory". Richard Cobbett of PC Gamer commented on the PC controls by saying "You want an Xbox 360 controller for this one. You could play it with a keyboard, but only in the same sense that technically you could fly if you flapped your arms hard enough." Kevin Schaller of Game Revolution, however, called the controls "responsive, though it takes a little getting used to".