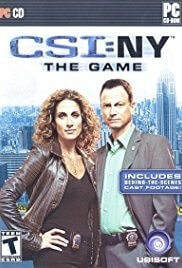 CSI: NY – The Game is a video game based on the CSI: NY television series. This is the sixth CSI game released, and the first for CSI: NY.

As with the previous CSI games, there are five cases to work on. However, the game has taken a drastic graphical change, opting for a stylised 2D cartoon look, instead of the rendered 3D graphics of previous games in the CSI franchise. The game will allow you to control a CSI (Mac or Stella) and solve cases, collect evidence and solve puzzles. You will also be able to interrogate suspects with branching dialogue options, and depending on your tone or line of questioning you may find the suspects refuse to co-operate, or tell you everything you need to know.

As of April 2009, Ubisoft released the final case ("Derailed"). This case requires game patch 1.01 (it can be installed if the PC has an active internet connection). Mac Taylor becomes the prime suspect on the case when his DNA is discovered all over the body of a dead man.

A man has fallen from the top of a building - was it homicide or was it suicide? Suspects include his boss, a tattoo parlour girl, and a doctor who gave him surgery. You work with Mac on this case.

An infamous food critic is found dead in a restaurant. Suspects include the general manager who had an affair with the victim, a chef who was criticised for a bad review from the victim, and another chef who made him meet with a mobster. You work with Stella on this case.

One woman is found dead in a theater used for magic and another at a construction site. Suspects include the two acts that were performing, a construction worker, and an amusement park worker. Is this the work of a serial killer? You work with Stella on this case.

A young girl was killed during her live session on the Internet. The killer wanted to stop the threats going around the school and stop her from telling the killer's secret. Suspects include the doorman, a brother and sister, and the headmaster. You work with Lindsay on this case.

Mac works on a frozen body recovered in a metro station. Unfortunately for him, the clues point to him as a suspect, as the victim was a rapist Mac couldn't throw in jail many years ago. Suspects include a mother who wanted Mac to stay away from her daughter, the daughter whom the victim attacked, and a homeless man who lives in the subway. You work with Mac on this case.

The game was met with very mixed reception upon release, as GameRankings gave it a score of 53.25%, while Metacritic gave it 53 out of 100.