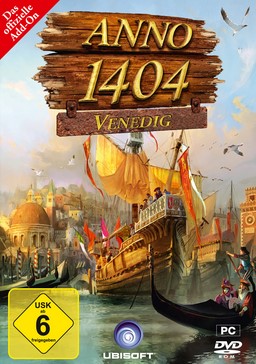 Anno 1404: Venice was released on February 26, 2010. The expansion includes 15 new scenarios, an espionage system, volcanic islands and an added third non-player power known as the Venetian dignitary Giacomo Garibaldi. Garibaldi enables the player to sabotage other player's cities and/or buy them out. Originally, there were also three new computer players planned but these were scrapped for unknown reasons. The Venice expansion also allows the player to play the original 6 scenarios of the base game but with all the added features and improvements of the Venice addon.

Many new buildings were added:

Furthermore, the player now has the option of requesting a quest in order to gain more honour points and/or gold coins/goods.