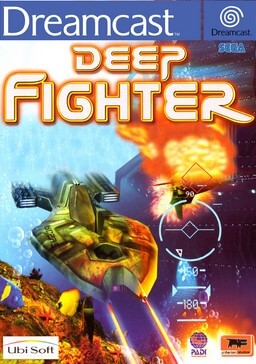 Deep Fighter is a submarine simulator video game developed by Criterion Games and published by Ubisoft. It was released for Dreamcast and Windows on August 22, 2000. The game has the player dog-fight enemies underwater whilst completing missions. The game contains cut scenes featuring famous actors, including David Walliams from the British television program Little Britain.

A spiritual sequel to the 1997 game Sub Culture, it is set in a war-torn community hidden beneath the sea. The race living there is human in appearance and possesses advanced technology, but are so miniscule that even regular marine life poses a dangerous threat. The ultimate goal is to construct a Leviathan Mother Ship to transport the entire society to safety, while fighting against a hostile faction known as the Shadowkin.

The player is a private who controls a fighter-type submarine in the civilization's defense force. Primarily playing from a first-person perspective, they must accomplish missions that unlock more powerful subs and weapons. In addition to combat, some missions are more varied, such as breeding fish, activating perimeter defenses and racing the player's wingmen. There are eight bosses in the game, which are often based on giant sea life.