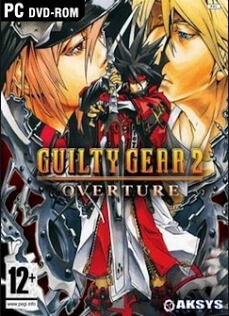 Guilty Gear 2: Overture (ギルティギア2オーヴァチュア Giruti Gia Tsū Ōvachua) is a video game in the Guilty Gear series made by Arc System Works for the Xbox 360. Unlike previous Guilty Gear titles, this installment makes use of 3D graphics. The Xbox Live demo of Guilty Gear 2 describes the game as, "a mix between the action and real-time strategy genre." A playable demo featuring three modes of gameplay was released in Japan via Xbox Live on 30 October 2007. A North American version was released on October 7, 2008 released by Aksys Games. A port for Microsoft Windows was released on March 31, 2016 worldwide by Arc System Works.

Guilty Gear 2: Overture uses an action-based gameplay similar to Devil May Cry and Dynasty Warriors while retaining special moves and animations that have been used in past 2D Guilty Gear fighters, combined with RTS/MOBA elements similar to Herzog Zwei and DotA, in order to create a new genre which designer Daisuke Ishiwatari describes as "Melee Action". Aside from the simple genre change from its arcade fighter predecessors, Overture utilizes a troop management system as well as certain points around each of the levels that can be captured and used as spawning points for troops. Various troops from the demo include the light infantry, capable of a special attack; Heavy infantry, capable of launching and juggle attacks; as well as magical troops which can heal and perform status increasing spells. To win, players must directly attack each other or each other's Masterghost, an immobile and defenseless 'main base' or spawning point for each player. Each time a player is defeated, they respawn by their Masterghost in exchange for a portion of the Masterghost's lifebar. Victory will be rewarded through: beating the enemy enough times so their Masterghost cannot revive them, directly attacking and defeating the Masterghost, or winning by basis of who has more life once a predetermined timer reaches zero and who has captured more Ghosts (territory points on the field that produce Mana) than your opponent. The game supports up to four players on Xbox Live or two players on the same console.

Servants obey their Masters to the best of their abilities and come in many different classes. Servants can be bought using the Master Ghost's Mana reserves but do not use any of the Master Ghost's energy. Servants can be used in two ways: you can even take Servants with you in Mana slots and re-summon them whenever you wish near you or they can be directed via the "Organ" sub-screen. Servants travel to their directed location and will attack any enemy servants they meet on the way. They can also take Ghosts and attack (but not destroy) a Master Ghost. Servants are unique to their Master's style and have different fighting skills per class (with the exception of Ky and Sin, whose Servants are the same).

The limitless source of energy, Mana (or magic) is used to fuel the Master Ghost. Masters can spend Mana to summon Servants, forge Contracts with new Servants and buy new skills and items.

The story takes place five years after the first Guilty Gear game. Sol Badguy is still free, but now travels with the young warrior Sin. Meanwhile, Ky Kiske, who is now the king of a country named Illyria, has learned of two shocking developments: first, the Gears that have been sealed away for many years are now beginning to vanish; and second, his kingdom is under attack by a mysterious force. Desperate, he sends out a "Wanted" poster with Sol's face on it, demanding he'd be brought to Illyria. Sol and Sin have realized that this is Ky's way of calling for help, and rush to the rescue as they find themselves surrounded by strange, doll-like women armed with giant wrenches.

All games from the serie "Guilty Gear"