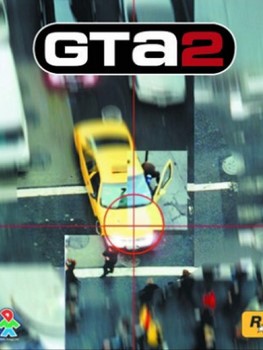 
Grand Theft Auto 2 is an action-adventure video game developed by DMA Design and published by Rockstar Games. It was released on 22 October 1999 for Microsoft Windows and the PlayStation, followed by Dreamcast and Game Boy Color releases in 2000. It is the sequel to 1997's Grand Theft Auto as well as the second installment of the Grand Theft Auto series. The open world design lets players freely roam Anywhere City, the setting of the game.

The game is played from a top-down perspective and its world is navigated on foot or by vehicle. The game was made available on Steam on 4 January 2008 as part of a collection.

Its successor, Grand Theft Auto III, was released in October 2001.

Grand Theft Auto 2 is set in an unspecified time in a retrofuturistic metropolis referred to only as "Anywhere, USA", but the game's manual and website use the phrase "three weeks into the future"; fictional journal entries on the Grand Theft Auto 2 website suggest the year to be 2013, but rather the in-game references suggest the game to be set in 1999.

The city is split into three levels, or "districts". The first level, Downtown, is a hub of business activity as well as the site of a large mental institution and university. The second area, the Residential District, contains the city's prison, a trailer park with an Elvis Presley-themed bar dubbed "Disgracelands", a reference to Presley's mansion Graceland, a shopping mall, and a giant hydroelectric power plant. The third and final area is the Industrial District; it holds a large seaport, a meat packing plant, a Nuclear Power Plant and a Krishna temple.

There are a total of seven fictional criminal gangs, some named after real life gangs or groups, in the game: the Zaibatsu, a corrupt corporation, is present in all three areas. The Downtown area is also home to the Loonies, a gang of mentally ill people who have taken over the city asylum, and the Yakuza. In the Residential area, the gangs include SRS Scientists and the Rednecks, who live in a trailer park and drive around in pick-ups with large Confederate flags. The Industrial area contains the Russian Mafia and the Hare Krishna. Each gang has their own special characteristics, car, and behaviour.

Grand Theft Auto 2 retained the overhead viewpoint of Grand Theft Auto, as well as the car-stealing/telephone-answering formula of the original. Claude Speed, the player character and protagonist, has the ability to explore cities on foot or in various vehicles. The aim is to achieve a certain score. On achieving this goal the player then can proceed to the next level. Doing missions awards the player more points than any other method but are not essential for completion of the game.

A new feature introduced in Grand Theft Auto 2 was doing missions for separate gangs, of which there are two new gangs for each of the three levels of the game, and one faction which is present in all levels. Being employed by one gang can cause distrust from others (working for gang No. 1 will incur the wrath of gang No. 2, working for gang No. 2 will cause enmity with gang No. 3, etc.). In the original Grand Theft Auto, only the local police pursued the player. In Grand Theft Auto 2, SWAT teams (4 Copheads) are introduced in the Downtown District, while Special Agents (5 Copheads) and the army (6 Copheads) are introduced in the Residential and Industrial Districts. These additional types of law enforcement begin chasing the player as his or her wanted level increases. The wanted level is represented by images of a cop's head, and vary between the Windows and PlayStation versions.

Grand Theft Auto 2 introduced an improved saving technique, unlike the original game, which saved only when finishing a city. If the player entered a church with $50,000, a voice announced "Hallelujah! Another soul saved!". This notified the player that the game had been saved. If the player did not have enough money, the voice would say "Damnation! No donation, no salvation!". These messages are not heard on the PlayStation version.

Other improvements pertain to city activity. Passing vehicles and pedestrians are no longer cosmetic parts of the environment, but actually play a role in gameplay. Sometimes pedestrians would occasionally enter and ride in taxis or buses. The game is noted for the behaviour of its non-player characters. Pedestrians, gang members and the police would occasionally engage in fights, and there are other carjackers (Green sweater) and muggers (Red sweater with white arms) in the city.

This game introduces 'side missions' such as being a taxi driver, bus driver, and a semi-truck driver along with retrieving 'hidden' packages ('GTA2' Badges) or Wang Cars (play on 'wankers'), and a health meter. Being a taxidriver would earn roughly 1 dollar per second. When standing still, passengers could get out if they want to, and the earnings will stop. Wang Cars only appeared in the second district. They were well hidden and usually required the player to take a severe amount of highspeed jumps to reach the cars, some of them parked on top of buildings. When the car was entered, the player spawned at the Wang Cars garage, with the garagedoor of the collected car lighting up. Collecting all cars resulted in 8 bonus vehicles parked outside the garage. Among these were cars prepped with oilslicks, integrated machineguns and a firetruck, living up its name as its watercannon was replaced with a flamethrower.