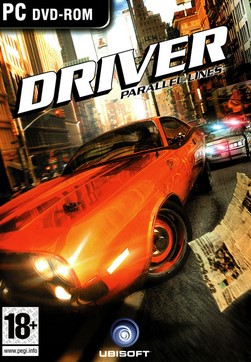 
Driver: Parallel Lines is the fourth installment in the Driver video game series. It is a departure from previous titles in the series that focused on multiple cities, as the game takes place in New York City, within the periods of 1978 and 2006. It is also the only title not to involve the undercover cop, John Tanner, but instead focuses on a getaway driver named T.K., who seeks revenge on a gang he worked with during his youth, after they framed him for the murder of a drug lord they held for ransom. Due to the underwhelming performance of Driver 3, particularly the often-derided on-foot sections, Parallel Lines returns to the formula used in earlier games in the series, focusing on driving, although shooting remains in the game, while the game is more open-ended than previous titles. It was released in March 2006 on PlayStation 2 and Xbox by Atari, Inc., and on Microsoft Windows and the Wii in June 2007 by Ubisoft.

In 1978, Terry "TK" Kidumms, a getaway driver, works for criminals in New York City mainly to help them escape the cops, while maintaining a room at a garage in Hunts Point with his close friend Ray Davies, the garage's mechanic. After helping another hoodlum escape the cops following a holdup, TK returns to the garage to rest. Ray, believing his friend can do more, decides to help him move up in the criminal world by introducing TK to Slink, the owner of a local strip club. Assigning him various jobs to tests his skills, Slink becomes impressed with his successes and eventually introduces him to two close associates - Bishop, a hardened man, and "The Mexican, an old business partner of Slink. The men assign TK to help assist them in the breakout of Candy, a noted criminal mastermind, from Rikers Island prison.

After Candy's escape, the group introduce TK to their boss Corrigan, a corrupt undercover detective, who reveals that he intends to take over the cocaine business from the city's Colombian cartel gang. Candy devises a plan to capture a prominent Colombian drug lord, Rafael Martinez, and ransom him back to the cartel, using explosives to divert his convoy into an ambush. TK successfully completes the kidnap and recovers the ransom money for Corrigan. Upon receiving the money, Corrigan and the others kill Martinez and betray TK by implicating him for the Colombian's murder. While the gang leave to take over the cocaine trade, TK is imprisoned in Sing Sing prison for 28 years, and makes plans to go after the group upon his release.

In 2006, TK returns to New York and reunites with Ray, learning his friend was betrayed after his incarceration. During his time in prison, TK learns that Corrigan became the city's new Police Commissioner, while the other organisation's members moved into different businesses - Slink moved into the adult industry and drugs manufacturing; Bishop became a drug kingpin; and Candy set up a prostitution ring and drug moving service. Going after the Mexican, whose life took a turn for the worse after the kidnapping, TK kills him and dumps his body for Corrigan to find. Ray then introduces his friend to Maria Cortez, an employee of Candy, and works with her to get close to her boss. During this time, TK pursues both Slink and Bishop, hitting their businesses before killing both men.

When Candy learns that TK is working for Maria, he attempts to use her in order to bait him into a trap. However, TK escapes it, saving Maria and killing Candy. Upon returning to Ray's garage, Corrigan meets with TK and reveals that Ray is working for him. In exchange for clearing up his gambling debts, Ray set up the assassinations of Corrigan's associates to erase all of Corrigan's connections to Martinez's kidnapping and subsequent murder. After murdering Ray, Corrigan flees when Maria arrives to stop him. TK quickly learns from her that she is Martinez's daughter and that she had been working for Candy to track down her father's killer, knowing that TK was set up. Working together, the pair place the bodies of Candy and Slink to be found by the police, before going after Corrigan himself as he flees in a helicopter. Defeated, TK prepares to kill him, but acquiesces to a request by Maria to let her and her people deal with him, leaving with Corrigan while TK walks away.

Driver: Parallel Lines takes place in an entirely open world environment, in which mini-games are now accessed from the in-game world instead of from a menu, while the game also features some new elements that are common with Grand Theft Auto - visible blood when someone is shot, an "Auto-aim" feature (with manual aim also available), a money system, fully modifiable vehicles (with a test track to test out upgraded vehicles), and environment destruction (i.e., lamp posts can now be run over and fire hydrants can break, spewing water into the air). A new felony system is incorporated in Parallel Lines, which can differentiate between personal felony and felony "attached" to vehicles the player has used. If the player attracts police attention on foot or in a certain vehicle, the player can suspend their wanted level by losing the police and entering a "clean" car, though it can be reactivated if they spend too much time in the sight of a police officer, who will eventually recognize the player as "wanted". The same principle applies to out-of-car activities such as weapon use, in which players can holster their weapon in order to lose police attention until spotted committing illegal acts again. For the Wii version, the felony bar is replaced with a "stars" system, similar to that of Grand Theft Auto, which light up when the player attracts police attention. Like Grand Theft Auto, the game features fictional, yet distinct styles of vehicles based upon real automobiles that were in use within New York between the two periods.

All games from the serie "Driver"