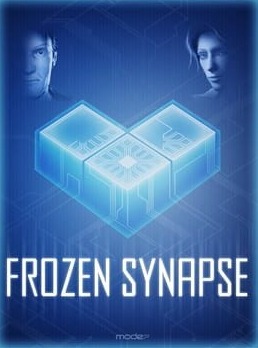 Frozen Synapse is a turn-based tactics video game developed by independent game developer Mode 7 Games, in which players plan their moves at their leisure and turns are resolved simultaneously. Players attempt to win by giving orders to a small squad of armed combatants, most commonly with the goal of eliminating all enemy units.

The game has online multiplayer, a single-player campaign, and a skirmish mode. The game and its soundtrack formed part of the Humble Frozen Synapse Bundle between 28 September 2011 and 12 October 2011, which ultimately grossed over $1 million and had over 230,000 downloads.

It is set in dystopian cyberpunk future, in which the player assumes the role of a tactical commander assisting a resistance faction in a struggle against a corporate government regime which has used its power to manipulate the populace, or is pitted against other commanders (human or AI) in a skirmish or multiplayer setting.

Frozen Synapse is a tactical combat simulation game, played as asynchronous turns by each player. Each player controls a small number of soldiers armed with various weapons.

The objective in most single-player missions is to eliminate the other squad, but there are also hostage protection and escort missions. Multi-player game modes include last-man-standing deathmatch, area protection, and hostage extraction.

Maps are generated pseudo-randomly to create a range of walls and cover, as well as starting positions for the soldiers. On each turn, the players are given an unlimited amount of time to lay out commands for each soldier to specific waypoints that will be performed during the resolution of the round, a period of about 5 seconds of simulation time. The player can set the direction that the soldier is looking, the soldier's stance and speed, and their default action upon seeing an enemy force in their line of sight. The game provides a facility to review all previous turns and simulate the projected results of the current turn, assuming that enemy forces maintain their current strategies, allowing the player to refine their actions.

Once the player is satisfied with their actions, they commit to this turn. Once all players have committed, the game resolves the actions, reporting these back to the players. Combat is resolved in a deterministic manner based on units' weapon strength, stance, and poise. As long as soldiers remain on both sides or other winning objectives are not yet completed, the players can then replay the results of that turn and plan for the next.

The game includes a "light" mode where players can see all movement on the board, and a "dark" mode where enemies that fall outside any line of sight from allied forces are hidden from the player, though they are given information about any foe's last known position and time since they were last seen.

The game includes a single-player campaign, where the player competes against the computer. The player can also play against other human players through a common server system, which also records games so that players can review them after completion of the game. The game's downloadable content includes new gameplay modes to allow players to compete cooperatively with each other.

Frozen Synapse only has one vs one multiplayer. Free-for-all, four-player, and two vs two are planned but will not be implemented in the near future. According to the developer blog, two-player co-op is in beta testing for the entire campaign.

In response to controversy about the ending in the video game Mass Effect 3, an update was released for Frozen Synapse which added an alternative ending. The ending contains the jibe "This is the ending to a computer game. We don't care if you like it". Of the experiment, Mode 7 Games developer Paul Taylor stated: "Honestly, it felt like vandalising my own work, which was interesting".

The game has received generally favourable reviews, holding a score of 85/100 on Metacritic, with particular praise for its "newly composed, evocative" soundtrack. It won the 'Audience Award' at the 2012 Independent Games Festival  and was held to be the 2011 Strategy Game of the Year by PC Gamer US. It has also received praise for its soundtrack, which gaming commentator John "TotalBiscuit" Bain has dubbed "The best soundtrack since Deus Ex."