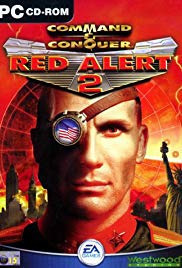 Command and Conquer: Red Alert 2 contains two playable factions, the Soviets and the Allies, which both previously appeared in Command & Conquer: Red Alert. The single player campaign is structured in an alternate-ending mode as opposed to a progressive story mode. Like its predecessor, Red Alert 2 features a large amount of full motion video cutscenes between missions and during gameplay, with an ensemble cast including Ray Wise, Udo Kier, Kari Wuhrer, and Barry Corbin.

Red Alert 2 was a commercial and critical success, receiving a rating of 86% from GameRankings. A sequel, Command & Conquer: Red Alert 3, was released in 2008.

The main objective of the game is to defeat enemy commanders, played by AI or human opponents, by destroying their bases to the point of enemy capitulation. Players must also work to defend their own bases to maintain their ability to collect money and produce units, both of which are essential in achieving the main objective. Once all enemy commanders have been defeated, a winner is declared.

Every aspect of gameplay in the game is based on the collection of money. In the game, money can be collected by several means. The most common is using miner trucks to gather ore and/or gems and transport them to a refinery. A player can also gain a lasting income by capturing oil derricks (neutral buildings that are present in some maps). There also are two one-time sources of money for Allied and Soviet players, namely: collecting random crates which are present in the map and selling off buildings which are controlled by the player. Allied players have a third one-time source of money, which involves using a spy to steal an opposing player’s money. The money is spent on constructing and repairing buildings and units. In both cases, players may start construction before having the full cost in one's reserves, as construction simply pauses if a player runs short of money.

The various nations are members of either the Soviet or the Allied factions, which are loosely based on the real life factions of the Cold War. One of the major praises of Red Alert 2 over the original Red Alert game was that playing as a specific country now made a difference. While every country has the basic buildings and units, each nation has a special unique unit, ability, or structure. This changed up the popular skirmish games, allowing for new strategies.

It is also the first C&C RTS not to include a “mission select” screen prior to levels that change the conditions of the next level.

Soviet vehicles tend to be more durable and have heavier firepower compared to their Allied counterparts. However, they are also more expensive to build and move more slowly, allowing Allied vehicles to out-maneuver and outnumber them. The Soviet infantry, on the other hand, are inferior to Allied infantry, but are cheaper and faster to train.

The Soviet faction is also superior in the early game and in land wars because of their more powerful and advanced tanks, while the Allied faction is better in the late game with more advanced units, such as those used in naval warfare. In particular, the Soviets are better for early game rushes, which are very common in online games.

In single-player mode, the player can either compete in one of three campaigns or compete in Skirmish mode where the battle rules and settings can be customized.

Red Alert 2 contains three campaigns. Boot Camp, Allied, and Soviet. Each campaign is distinct in its own way. Boot Camp is simply a tutorial campaign consisting of two missions in which the player is introduced to the fundamentals of the game with the use of Allied forces. If played, Boot Camp leads into Allied Campaign chronologically. Allied and Soviet campaigns are the two main campaigns of the game, each consisting of twelve missions in which the player faces off against one or more computer-controlled opponents. In some missions, the objective is simply to defeat all opposing forces in the area; other missions have more specific objectives, such as capturing or destroying a particular enemy structure or defending a particular structure of the player's own from enemy attacks. While fundamentally different in story and units, both Campaigns are structured similarly. Both begin with the player operating a limited base or otherwise a Mobile Construction Unit to start from scratch plus a platoon of certain units, but in a few missions construction is not required.

Skirmish mode is essentially the free-for-all multiplayer mode played against computer-controlled opponents. The player chooses a map against as many players the map supports. The player can also change settings such as the number of starting units, the monetary levels at the beginning, game speeds and the availability of superweapons. There are no special objectives, just eliminate all enemies units and structures.

Red Alert 2 includes two different multi-player modes. One, LAN allows the player to play alongside friends and others without the use of an internet connection. The other, Online Play allows the player to play across the internet and against players from across the globe. LAN play allows for only Skirmish Mode that is available in single-player. Online play allows for tournaments, private games, public games, ladder ranking games and also contains a chat system. In 2005, control of online play for Red Alert 2 and a number of older C&C games was passed over from EA to XWIS, a community-run server.