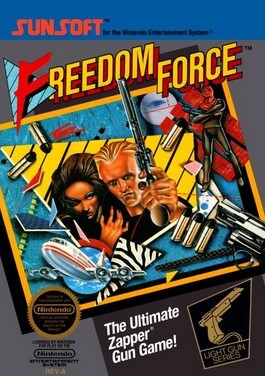 
Freedom Force is a real-time tactical role-playing game developed by Irrational Games and published by Electronic Arts and Crave Entertainment in 2002. The player guides a team of superheroes as they defend Patriot City from a variety of villains, monsters, and other menaces. The game's budget was $2 million. A sequel, Freedom Force vs The 3rd Reich, was self-published in early March 2005. The games were made available on Steam on May 29, 2009.

Fleeing Lord Dominion and his invading forces, Mentor headed towards Earth in a small spaceship containing many canisters of the mysterious Energy X. Lord Dominion's ships pursue Mentor and destroy his craft just outside the Earth's atmosphere; the blast scatters containers of the substance over the metropolis of Patriot City. Energy X strikes many of the city's inhabitants, giving them superpowers that echo their personality traits (for instance, Minuteman's staunch patriotism and El Diablo's fiery temper) or draw on the situation they were in when energized (e.g., The Ant or Nuclear Winter). Most of the game is set in Patriot City, but a number of other locations and time periods are used, including magical realms, prehistoric times, and realms entirely removed from time and space.