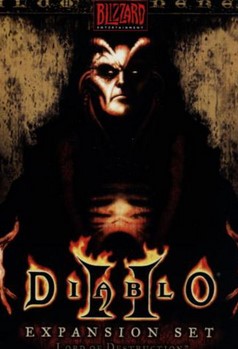 Diablo II: Lord of Destruction is an expansion pack for the hack and slash action role-playing game Diablo II. Unlike the original Diablo's expansion pack, Diablo: Hellfire, it is a first-party expansion developed by Blizzard North.

Lord of Destruction added content in the form of two new character classes, new weapons and an addition of a fifth act, and also dramatically revamped the gameplay of the existing Diablo II for solo and especially multiplayer.

After the player successfully ventures into Hell and defeats Diablo in Act IV, upon returning to the Pandemonium Fortress they are met by the Archangel Tyrael with an urgent summon. Tyrael opens a portal to Harrogath, a stronghold on Mount Arreat in the northern Barbarian Highlands. As shown at the end of Act IV, while two of the Prime Evils of Hell, Diablo and Mephisto, have been killed and their Soulstones destroyed at the Hellforge, their surviving brother Baal has impersonated Tyrael and retrieved his own Soulstone from the narrator Marius. Baal has raised an army and attacked Mount Arreat, whose Barbarian inhabitants are tasked with defending the Worldstone.

There are six quests in Act V. The player starts off at the stronghold of Harrogath. There are also ice caverns in the mountains, as well as hellish subterranean pits (reminiscent of Hell in Act IV) for extra monsters and experience. After reaching the summit of Arreat, the player gains access to the Worldstone Keep.

Many of the folk in Harrogath do not initially trust the player character (even if they are playing as the Barbarian class). The player has to slay Shenk the Overseer who is leading the assault in the Bloody Foothills in order to relieve the siege of Harrogath. The player can also rescue the captured Barbarian defenders. Completing these quests gradually helps the town inhabitants warm to the player and they will provide aid or other services.

The player soon discovers that one of Harrogath's councilors or Elders, Nihlathak, has made a deal with Baal to spare Harrogath in return for access to the Worldstone Keep. After rescuing Anya and learning of this betrayal, the player has to find and kill Nihlathak, who is sheltered between his minions in the Halls of Vaught.

Before gaining access to the Worldstone Keep, the player must defeat The Ancients, which are the three Barbarians - Talic the Defender, Madawc the Guardian and Korlic the Protector - guarding the Worldstone who allow only the worthy to pass. After the player succeeds, the Ancients warn that Baal is already into the Keep and has blocked Tyrael's presence.

Finally, the player fights Baal in The Worldstone Chamber, after defeating his pack of minions at the Throne of Destruction. Tyrael appears after Baal is dead, congratulating the player and opening a portal to Destruction's End, the conclusion of the game. As the Worldstone is corrupted by Baal, Tyrael has no choice but to destroy it before its power of Hell takes root.