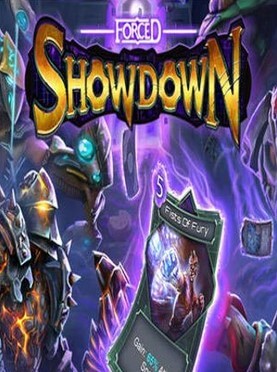 FORCED: Showdown is a top-down single-player bullet-hell brawler developed by Danish indie game developer BetaDwarf. The game was released in March 2016 for Windows, OS X and Linux through the Steam platform as well as GOG. The game revolves around Contestants fighting for wealth and glory in an ever-changing galactic game show. The gameplay mixes rogue-lite aspects with a trading-card game. It consists of selecting a champion, enhancing and empowering him and his abilities to battle through hordes of minions and dodging their attacks to survive.

The player fights through a number of arenas, killing enemies along the way and playing cards. After 8 arenas, the player has completed a Battle, which is a small part of each campaign. Completing enough battles finishes the campaign. There are 4 campaigns in the game.

Players have at their disposal 4 (5 with the Drone Invasion expansion) characters, each one with their unique set of skills, that they must choose before entering a show.

Squire of Light is a short distance ranged hero. By utilizing the powers of the sun, he can gain temporary immunity, create heavy sun blasts and knock enemies back.

Volco is the signature melee hero of the game. He carries around a big hammer, and smashes his enemies with the power of magma.

Stormbringer is the long-range hero of the game. He carries a bow and has a cloud pet which enhances his attacks with the power of thunder.

Ravager is an alien beast that relies on its claws to swiftly attack his opponents by leaping on them.

Settsu is an ex-soldier in a mech suit able to shoot enemies with her pulse rifle, fire big balls of plasma and fly with her jetpack.

Deckbuilding is an important aspect of Forced: Showdown. Each deck must contain exactly 30 cards and at maximum 2 of each card. There are 3 types of cards : upgrade cards, spell cards and consumable cards.

Upgrades - When played, these cards transfer their effects to the player, making him stronger. They are effective until the end of a battle. Playing two similar cards will stack up their effects. Upgrade cards can enhance some of the player’s abilities or some of his characteristics. At the end of a battle, all the upgrades a player received through his cards are reset.

Spells - These are cards that have an immediate or temporary effect and disappear once used. They can go from healing the player to adding mana to his manapool or drawing more cards.

Consumables - These are cards that gives an item to the player which he can use later in combat. These items are there to help the player by summoning shooting drones or making him invincible for a few seconds.

Each card has its own mana cost, related to its power. At the beginning of each arena, the player will receive some mana that he can use to play cards. The amount of mana gained increases by 1 after each arena thus allowing to play stronger and more expensive cards.

Battle Rules are modifiers that affect a Battle. There are two types of modifiers : the positive and negative. Positive modifiers are rules that help the player by empowering him or giving him an advantage but adds more enemies in the arena. Negative modifiers weakens the player or empowers the minions but reduces the number of enemies.

The players are cast as Contestants, gladiators in a galactic game show in which they must battle their way through, defeat the Titans waiting for them and ultimately survive to earn fame, glory and wealth. CSAR, the Computer-Simulated Arena Referee, acting as the show presenter accompanies the player throughout the show. In the first program, or campaign, called The Crucible, the player faces Raff the Burninator, a large demon wielding fiery swords. In Frontline, the second program, the player must defeat the wealthy Ruby Von Wouthingtonne IV and her tank. Then, in The Grand Return, the mysterious Master opposes the player. Finally, in The Mentor’s Maze (the campaign from the Drone Invasion expansion), the wise R3-KT will be the player’s final opponent. Only by defeating all these enemies and their minions will the player become the next champion.