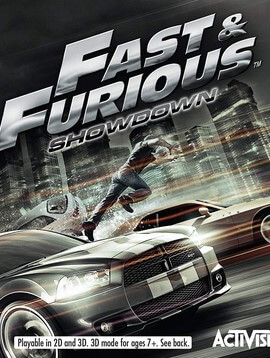 Fast & Furious: Showdown is a cooperative racing video game developed by Firebrand Games. It was published by Activision for Xbox 360, PlayStation 3, Wii U, Nintendo 3DS, and Microsoft Windows. The game is based on The Fast and the Furious series, and bridges the story between the movies Fast Five and Fast & Furious 6.

The player takes control of many of the major The Fast and the Furious characters, except for the noticeably absent Dominic Toretto.

The story begins with a cut scene featuring Monica Fuentes finding Riley Hicks digging around through files in her office. Riley introduces herself and states she is going to meet Luke Hobbs in 24 hours, and needs to know everything Hobbs has been up to. The missions are then events told by Monica to explain what Hobbs had been dealing with. Through this, we see various events from the movie, like the safe dragging scene from Fast Five, or the hijacking scene from Fast & Furious.

The gameplay of Fast & Furious: Showdown focuses on cooperative driving and car combat. The game is centered around different missions, all centered around driving around in semi-destructible loops. These missions can range from a normal race to surviving a certain number of laps. In some missions, the character may need to hijack another vehicle by jumping from the top of their vehicle to the other. All the cars have health bars, and some feature nitro abilities.

The game can be played with an AI partner or in local cooperative play. There is no online gameplay. The gameplay varies from having 2 separate cars, to one person manning the turret while the other drives, to one person jumping out of the car and hijacking the other.