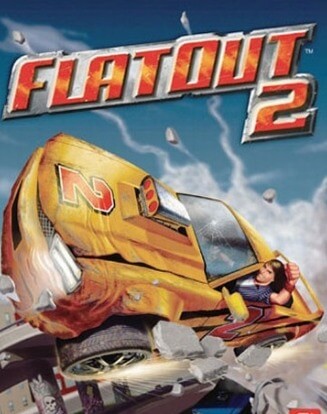 FlatOut 2 is a racing video game developed by Bugbear Entertainment and published by Empire Interactive. It is the sequel to the 2004 game FlatOut.

This game is themed more on the street racing/import tuner scene than its predecessor. A notable change is the tire grip; players can take more control of their car, worrying less about skidding in tight turns. The game has three car classes: derby, race, and street.

The ragdoll physics in the sequel have been greatly updated. During the race, the driver may be thrown out of the car if slammed into a wall at a high speed. In the numerous Stunt minigames the goal is to shoot yourself out of the car and complete objectives like knocking down a set of bowling pins, hitting the designated spots on a dartboard, score a field goal or fly through flaming hoops. Players must use 'aerobatics' to control the driver in-flight, but overusing it will increase drag, which will slow the driver down and possibly prevent him/her from reaching the designated target. If the driver falls short of the target, players can use the "nudge". This gives the driver a small upward boost and slightly reduces drag. In the Stone Skipping Stunt minigame, the players must use nudge just as the driver hits the surface of the water to skip the most efficiently and reach the furthest.

The PC version of FlatOut 2 received "generally favorable reviews", while the PlayStation 2 and Xbox versions received "average" reviews, according to the review aggregation website Metacritic. In Japan, Famitsu gave the PS2 version a score of all four sevens for a total of 28 out of 40.

All games from the serie "FlatOut"