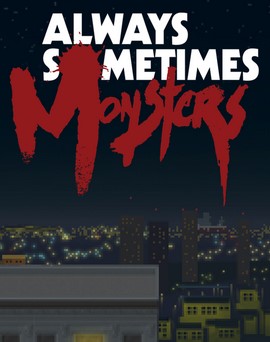 Always Sometimes Monsters is a role-playing video game created by Canadian indie developers Justin Amirkhani and Jake Reardon, developed by Vagabond Dog and published by Devolver Digital. The game was released on 21 May 2014 for Microsoft Windows. A later update using the MonoGame framework brought the game to OS X and Linux on 10 January 2015 and to iOS and Android on 28 May 2015.

The game puts players in the role of an author who receives notice that the love of their life is marrying someone else across the country within a month. After being evicted from their apartment on the east coast, players then head to the west coast in order to intercept the wedding and win back the love they lost.

As the game starts, players are introduced to their character through a narrative sequence that allows the selection of their character and love interest. The player's relationship with their love interest can be both straight or gay, depending on their choice. From there, the game begins its narrative, told through text windows supported by character portraits. Players make choices in dialogue and in action to alter the course of the story and change the fate of their protagonist.

Players can walk around to explore city environments, interact with NPCs, and find the means to earn money so they may progress to the next location. This often means taking repetitive odd jobs for low pay, or compromising a concept of morality.

The game plays out over a span of 30 in-game days, with time progressing through morning, day, and night as activities and events are completed. Choosing how to spend time during the journey is a key component of the game, as some options disable others.