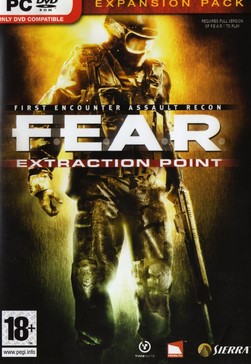 F.E.A.R. Extraction Point is an expansion pack for the psychological horror first-person shooter video game F.E.A.R., published by Vivendi Games and developed by TimeGate Studios (rather than Monolith Productions, the developers of F.E.A.R.). It was released in October 2006 for Microsoft Windows and requires the full original game in order to be played. Also, a stand-alone single player demo has been previously released. The expansion was ported to the Xbox 360 and released as part of the F.E.A.R. Files package in November 2007.

This expansion owes its name to the game's ultimate goal for the player, to reach the extraction point and leave the city where the adventure takes place. Extraction Point adds new weapons, enemies, and single-player levels, but no new multiplayer content. Additional improvements were also made to the enemy artificial intelligence. The sequel to F.E.A.R., F.E.A.R. 2: Project Origin, ignores the events of both expansion packs.

The plot of the expansion starts off exactly where the original game left off; while the huge explosion of the "Origin Facility" has flattened the Auburn district and devastated the city, the helicopter evacuating the survivors of the F.E.A.R. team crash lands in the midst of the chaos.

The player is reunited with Delta Force operator Douglas Holiday and F.E.A.R. technical officer Jin Sun-Kwon at the crash site. Continuing from there, the player meets Fettel in a nearby church. Fettel notes that the circumstances do not make sense since he had been killed. He continues by reactivating the Replica soldiers, who have been dormant since his death, and sends them after the player. Holiday mentions that an extraction point has been established at the roof of Auburn Memorial Hospital, informing the Point Man (the player) that he should proceed there as well. Meanwhile, Kwon is captured by Fettel's Replicas, but she is later able to escape while being transported via the subway; from there, she proceeds on her own to Auburn Hospital. The player and Holiday eventually meet up and navigate through the warehouse district of the city, facing great Replica resistance along the way. Eventually Alma, through her apparitions, violently murders Holiday.

The player is forced to proceed alone toward and through the subway system, which leads directly to Auburn Hospital. During the player's journey through the winding tunnels, Alma, in her younger form, clears the way for the player multiple times by killing Replica soldiers impeding the player's path. Replica forces eventually become desperate and place demolition charges in the subway tunnels with the hope that the resulting explosions will kill the player. While initially unsuccessful, the player is eventually caught in one of these demolition explosions and is ejected from the tunnels onto a nearby parking structure. From here, the player proceeds to the hospital which neighbors the parking structure.

After finally reaching Auburn Hospital, the Point Man hears a scream from one floor above him. He bursts into the room, only to find four ghostly figures floating around Jin's dead body. Now, with nothing to fight for but his own survival, the Point Man proceeds to the life service elevator. Suddenly, a power outage occurs and the player must find a way to restore it, being taken to the hospital's morgue in the process. While walking around the dark basement, the Point Man witnesses several hallucinations (thought to be the physical form of what is in Alma's mind) which include a series of prison cells, containing the dead ATC victims of Alma's murders in the previous game. Eventually, the Point Man witnesses a hallucination that involves the older and younger Alma reuniting in a blue light. After that hallucination, the Point Man returns to the hospital and notices there's no longer blood on the floor, walls and bathtubs. The elevator is then reactivated and the player finally reaches the roof of the hospital. Fettel tells the player he (the player) does not understand the situation and proceeds to unleash a squad of Replica Elites on the player. As the player finishes dispatching the squad, a UH-60 Blackhawk helicopter proceeds to evacuate him. However, when the player approaches, Fettel, through unknown methods, destroys the Blackhawk, sending the Point Man into unconsciousness. When he awakens, he staggers to the roof railing, to witness the entire city in flames. The credits roll, ending with Fettel's line from F.E.A.R. "A war is coming, I've seen it in my dreams. Fires sweeping over the earth, bodies in the streets, cities turned to dust. Retaliation..."

The expansion packs takes place in an alternate universe from the original F.E.A.R., the game's sequel, F.E.A.R. 2: Project Origin, disregards the storylines of both Extraction Point and Perseus Mandate. Only the games developed by Monolith Productions are considered canon.

Gameplay remains essentially the same as in the original F.E.A.R., though Extraction Point touts some new additions, including 3 new weapons (a minigun, a laser weapon, and a deployable turret), a few new enemies, as well as new locales (though frequently similar to the original game's environments, a common complaint of reviewers). Firefights are still cinematic and usually on a grander scale than in F.E.A.R. - there are frequently a larger number of enemies to deal with and lengthier battles. Another new feature of Extraction Point is the ability to bash open doors by using the melee function, as well as blast them open with explosives. The 'hallucination' sequences are notably more gratuitous and frequent than they were in the first game. In addition, certain supply crates bearing the ATC logo can be bashed open, revealing weapons or health packs.