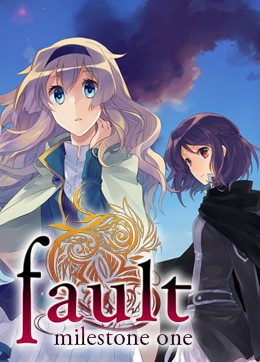 Fault Milestone One is a visual novel video game developed by Alice in Dissonance and published by Sekai Project. It was first released in Japan for Microsoft Windows, OS X, and Linux in 2013, with an English version localized and released by Sekai Project the following year. Versions for the Nintendo Switch, PlayStation 4, and PlayStation Vita are also planned to be released in 2019.

Fault Milestone One follows the royal guardian Ritona, who uses magic to escape the kingdom of Rughzenhaide, along with princess Selphine, after it gets attacked by mercenaries. The two arrive in a strange country unfamiliar to them halfway across the world, and follows their attempt to return home. It is the first entry in the Fault series, and was followed by Fault Milestone Two in 2015. Considered a "kinetic novel", the game is mostly linear and features little gameplay interaction by players.

The game was directed and written by Munisix, with artwork by Hare Konatsu. The story was initially based on a pitch for a role-playing game delivered to Munisix; being underwhelmed with it, he reworked it until it according to him no longer resembled the original idea. When Alice in Dissonance were approached by Sekai Project about an English localization, they wanted to add some polish first. They financed the localization, as well as ports for other platforms through a crowdfunding campaign in 2014. The game was a commercial success according to Munisix, and received positive reception.

Fault Milestone One is a linear visual novel with no player interaction aside from one player decision early in the game that affects some dialogue. The game focuses on telling a story, with the player being an observer. The player has access to an in-game encyclopedia detailing concepts seen in the game. The game is set in a world where the art of using magic, called "manakravte", exists and is used in almost every aspect of life. However, not everywhere on the planet has high concentration of mana. These places, called the "Outer-Pole", have instead had advances in science and medicine. The story follows the manakravter Ritona, the royal guardian for princess Selphine of the kingdom of Rughzenhaide. Among other characters are Rune, a girl from the Outer-Pole, and her brother Rudo, the head of a major company.

Fault Milestone One was developed by Alice in Dissonance as the first work under Project Written, the name of their operations. It was directed and written by Munisix, with character designs and other art by Hare Konatsu. The "Milestone" in the title comes from how Alice in Dissonance wanted to do something different from the commonly-used word "Episode"; as the story is about a journey, they found "Milestone" thematically fitting. While Munisix is a native speaker of English, he chose to write the game in Japanese, stating that his reason for this was that he had had more exposure to the visual novel medium in Japanese than in English, also saying that he would have used English if he were to write a movie script. According to him, the writing is the aspect that takes the most time during the production, with a lot of time spent on coming up with ideas and turning them into "something consistent". Describing himself as a disorganized person, he has said that they have had to delete whole segments due to him overlooking some aspect of the game's world.

The game's story originally began as a pitch for a role-playing game that was delivered to Munisix at some point in the 2000s. It included the premise of a princess defeating an enemy that had devastated her homeland, as well as character names and personalities, and asked Munisix to write a story. Munisix found the pitch underwhelming, but still worked on it, attempting to make it more interesting; while he was working on it, the person who had delivered the pitch stopped contacting him. Not wanting to abandon the work he had put into the project, Munisix continued with the project, making several changes to the point where it no longer resembled the original pitch. Among these were additions to the game world and cast, including the creation of Ritona and the Outer and Inner-Poles, the concept of the "path down", and a motivation for the game's antagonist. He also changed the structure of the story so that it could work as a manga or as "a better game than it was intended to be".

Munisix wrote the main characters to be strong women who can "more than adequately do" what male characters from shōnen manga can, intending for both male and female players to be able to look up to them. He did not consider the characters' sexual or affectionate attractiveness to be a primary goal, and intended for them to be "gritty and cool" rather than "cute and lovely". He based Rune's condition on psychopathy. He aimed to give each part of the game world its own feeling: Rughzenhaide and the Alliance were made similar to the Age of Enlightenment, but with an information technology (IT) revolution that did not require computers. According to Munisix, the names of characters and locations came about naturally, with no time spent on any naming scheme. He tried to write slice-of-life scenes for the game, but felt that they were not compelling or convincing, stating that the tense situations the main characters are in throughout the story leave little room for levity, as they need to get home alive and constantly have to consider potential dangers.

For the game's character design, Munisix initially gave Konatsu specifications of what each character would look like; as they kept working on the Fault series, they "found a rhythm", with Konatsu designing the characters according to their personality and function. They go through multiple prototypes, with some designs turning into other characters, and some clothes being reused on other characters. Due to misunderstandings, Konatsu initially designed Rune as a male character. Munisix had imagined Rune as looking "girly", wearing a skirt and having long, black hair. However, when Konatsu redid the design, elements of the original male design remained, with Rune being given pigtails and pants, which Munisix later said that he preferred over his original concept. Some locations that did not exist in the original draft, such as the Zhevitz family manor, were added to the story late during the game's production when Alice in Dissonance was low on money. Because of this, they had to resort to using stock background images.