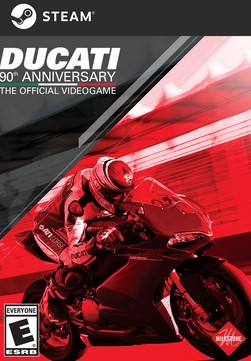 Ducati – 90th Anniversary, stylised as DUCATI: 90th Anniversary, is a motorcycle racing video game developed and published by Italian developer Milestone. It was released digitally for Microsoft Windows, PlayStation 4, and Xbox One on 9 June 2016. The game also had a retail release in Italy, exclusive to GameStop shops.

Ducati – 90th Anniversary is a standalone spin-off title of Milestone's 2015 motorcycle game Ride. The game is dedicated entirely to the history of the Italian Ducati motorcycle company which had been founded in 1926 and which rose to prominence with their racing bikes in the 1950s.

The game includes 39 motorcycles produced by Ducati from their beginnings to the present day, as well as several well known models used by Ducati's professional riders throughout the decades. The following models are featured in the game:

This list is incomplete; you can help by expanding it.