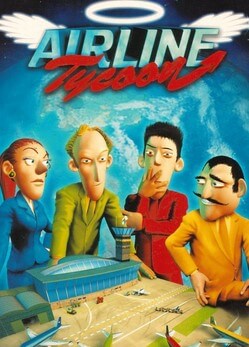 Airline Tycoon is a business simulation game by Thomas Holz and Robert Kleinert, in which the player must successfully manage an airline. The original was developed by Spellbound, and published by Infogrames, however, the succeeding versions were published by a variety of publishers. The original Airline Tycoon was created for Windows, however, the later Deluxe version was also ported to Linux, Mac OS X, MorphOS, ZETA, iOS and Android. In this game, like all Tycoon computer games, the objective is to become a tycoon, and in this case, an “Airline Tycoon.” This is achieved through the balance of income and expenditures.

A simulation computer game where the player acts as manager of an airline, competing against three other tycoons. The names of the four tycoons are: Tina Cortez (Sunshine Airways), Siggi Sorglos (Falcon Lines), Igor Tuppolevsky (Phoenix Travel) and Mario Zucchero (Honey Airlines). The player must keep their aircraft in good shape and equip them at such a level as to keep the customers satisfied, buy new planes (from the expensive Airplane Agency or from Mr Schlauberger at the museum who sells old planes at a much lower cost) and take out bank loans if required. The player must also manage their personnel, plan flights, buy fuel, attend meetings in the airport manager's office and, if there is the time, slip into Rick's café for a quick cup of coffee. The player can also perform sabotages on the other players. The graphics are bright and decidedly tongue in cheek: the tycoon Igor Tuppolevsky has a set of Russian dolls on his desk—and an open tin of caviar, while Tina Cortez has a picture of a matador and a bull's head.

With a network, up to four people can play at once and the game status can be saved (as it can in single-player mode) for longer games.

The original game was released in August 1998 in Germany. It was not released in any English-speaking country; however, there was an official English demo.

The first Airline Tycoon title to be released in United States and the United Kingdom was Airline Tycoon First Class. It was published in 2001 by Monte Cristo; however, the publisher decided to remove First Class subtitle from the game box and manuals, though it remained in-game. Features added in First Class include ten brand new missions, multiplayer mode with up to 4 players, new MIDI music, cargo transportation and more.

In 2003, Spellbound released a third Airline Tycoon addition, named Airline Tycoon Deluxe. It included all of previous versions, the only new part of the game was twenty new airports and possibility of accepting cargo from remote estates. Originally it was released in limited edition of 5000 items. It was available only in Germany, though it was not translated into other languages. However, Linux, Mac OS X and ZETA versions released in Autumn 2005 and Winter 2006 by RuneSoft are available in English, German and French.

On 24 March 2015 Airline Tycoon Deluxe was re-released on the digital distribution platform gog.com, including the source code.

In 2001 an IGN review gave Airline Tycoon a good rating with 7.9/10. Airline Tycoon 2 received on Metacritic a mediocre score of 57/100 from four reviews.