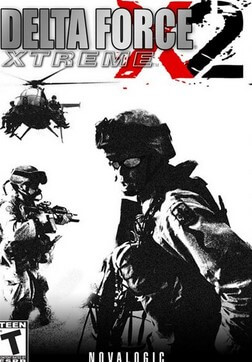 Delta Force: Xtreme 2 (DFX2) is a first-person shooter by NovaLogic.

NovaLogic's previous title was Delta Force: Xtreme, which was released in April 2005.

The game was officially released on June 2 2009 in North America, and became available worldwide through digital download through numerous sites including the NovaWorld Store, as of 19 June the game is available for download through Steam. DFX2 focuses on fast and intense military FPS gameplay. It supports the popular Delta Force style infantry play, and blends in fast action vehicle combat from Joint Operations. DFX2 is similar to the older titles' gameplay style and will be a more "complete" version of Delta Force Xtreme, along with fresh content, better weapons and vehicle balancing, improved networking and cheat protection. DFX2 does not use Angel Falls' engine. DFX2 has added multiplayer features, such as in-game squad emblems on characters and vehicles, and the ability to respawn in teammates' vehicles. DFX2 comes with the MED mission editor and a huge number of terrains and assets for players to create their own battleground and host them online. The game also works with the beta version of the NILE editor - although not officially supported.

A free beta was available to the public for DFX2. The beta was first issued to Gold Members at NovaWorld 2, but later anyone could download it and play. Additionally, players were able to test both single player and multiplayer content.