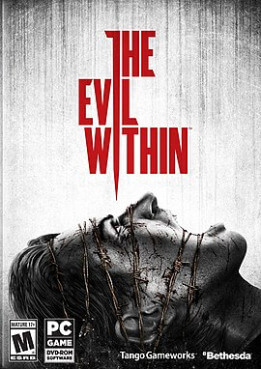 The Evil Within is a third-person survival horror video game developed by Tango Gameworks and published by Bethesda Softworks. The game was directed by Resident Evil series creator Shinji Mikami and was released worldwide in October 2014 for PlayStation 3, PlayStation 4, Xbox 360, Xbox One and Microsoft Windows.

The game centers on protagonist Sebastian Castellanos as he is pulled through a distorted world full of nightmarish locations and horrid creatures. Played in a third-person perspective, players battle disfigured nightmare-like enemies, including bosses, using guns and melee weapons, and progress through the levels, avoiding traps, using stealth, and finding collectables.

The single-player story is arranged in chapters, which players complete in order to progress through the story. The game is played from a third-person perspective in which scavenging for supplies and learning when to fight or run are key factors in surviving the dangers of the game. Such dangers include: bear traps, barbed wire traps, bombs, and spike traps; 'The Haunted', the game's most common enemy; 'Reborn Laura', a multi limbed, long haired, crawling creature; Ruvik, the game's main antagonist; 'The Keeper', a large humanoid with a safe as a head who wields a large meat tenderizer hammer; and 'Sadist', a large humanoid wearing a spiked metal mask on his face, wielding a chainsaw covered in blood.

Sebastian Castellanos, the protagonist, needs to make use of the environment and things he may find in order to survive. The game world can transform during scripted events and as a result of player actions, altering locations and creating new paths or teleporting the player to new areas. Castellanos must use medical items to restore health; some of these items cause temporary hallucinogenic effects. By collecting vials of 'Green Gel' hidden throughout the game, players can upgrade Castellanos' abilities; more ammunition, extra stamina, and additional health are some of the upgrades.

Players have a safe house called 'Safe Haven' that can be accessed during scripted events and by finding mirrors. The safe house is a mental hospital and has several accessible areas such as a save point, an upgrade room (where the player may upgrade Sebastian's skills), and the safe room where keys are used to open storage safes which contain useful items such as green gel and ammunition. These keys are collected by finding and breaking 'Madonna' statues hidden throughout the game's levels. There is a nurse called Tatiana who greets Sebastian when he teleports to the safe house.

The player has access to various weapons such as a revolver, shotgun, sniper rifle, knife, grenades, and the 'Agony Crossbow', a projectile weapon that fires bolts capable of freezing, blinding, electrocuting, or exploding enemies. Ammunition for weapons is very scarce, but mechanical components can be harvested to craft additional bolts. One source of components, bombs, are traps that react to the player's proximity or movement. Bombs can be stuck to walls or the floor, in chests, and in vending machines. The bombs can be disarmed via a minigame. Melee combat is designed only to create distance between the player and enemies, although the player can instantly kill some unaware enemies after sneaking behind them. Enemies that are downed or incapacitated are capable of reviving; to avoid this, players may set fire to the downed enemy using a limited supply of matches to permanently defeat them. Certain items in the environment, such as bottles, can be thrown to stun or distract enemies.

There are seven different types of collectables in The Evil Within: 'Personal Documents'; Sebastian's personal log, detailing his life as a detective and his life with his wife and daughter. 'Documents'; the personal logs of other characters. 'Map Fragments'; pieces of the game's map; once collected, they are stored at the safe house. 'Newspapers'; newspapers detailing events concerning or involving Sebastian. 'Missing Persons Posters'; posters of characters Sebastian encounters throughout the game who have been reported missing. 'Audio Tapes'; tapes containing a recording that can be played which are recorded by characters through the game. Collectables can be found in levels themselves or in the safe house.

The player unlocks several bonuses for completing the game. Extra weapons, character models and bios, 'AKUMU' difficulty (the game's hardest difficulty level), and New Game+ are some of the unlocks.

While investigating the scene of a gruesome mass murder at Beacon Mental Hospital, Krimson City police detective Sebastian Castellanos (Anson Mount), his partner Joseph Oda (Yuri Lowenthal), and Junior Detective Juli Kidman (Jennifer Carpenter) find themselves suddenly thrown into an unreal world, after hearing a high-pitched noise. Shortly after this occurs, Sebastian is separated from his partners and is forced to flee from a monstrous man wielding a chainsaw. Upon reuniting with his colleagues, they attempt to escape via ambulance while Krimson City is destroyed and rearranged by a massive earthquake, eventually causing them to crash. Freeing himself from the wreckage, Sebastian wanders through unnatural forests and abandoned buildings full of monstrous creatures, and witnesses the apparition of a disfigured man in a white hood. Trapped in the nightmare world, Sebastian encounters one of Beacon's doctors, Marcelo Jimenez (Daniel Riordan), who is searching for his patient, Leslie Withers (Aaron Landon). Jimenez identifies the hooded stranger stalking them as Ruvik (Jackie Earle Haley).

Sebastian eventually reunites with Joseph, though it is shortly revealed that Joseph is suffering from a strange form of transformation which compels him into a murderous rage. While he is able to control it for the most part, Joseph warns Sebastian to be wary of him if he turns. The two eventually find and rescue Kidman from drowning in a crude contraption, though they are soon separated again after hearing the high pitched noise.

The Evil Within System Requirements

(0) Comments on "The Evil Within Full Version"