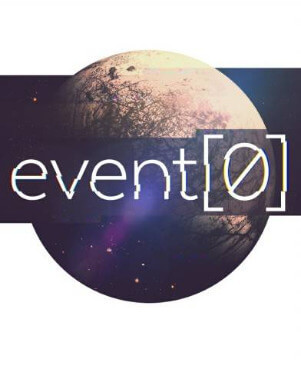 Event is a first-person science fiction exploration video game developed and published by Ocelot Society. It was released on September 14, 2016 for both Microsoft Windows and macOS.

Event is set in an alternate timeline where humanity achieved interplanetary space travel as early as the 1980s. The game takes place in this timeline's 2012, where the player's character is selected by International Transport Spacelines (ITS) to be part of a mission to Jupiter's moon Europa, from Earth. En route, the ship suffers a catastrophic failure and the player-character appears to be the only member of its crew to escape into a lifepod. The pod drifts for several weeks until it comes across the Nautilus, a leisure ship built in the 1980s. The player-character docks with the ship, and discovers that while the Nautilus is still functional, it has fallen into disrepair, with no sign of its human crew. The only conversations on the ship are through the ship's artificial intelligence (AI) named Kaizen-85 (from the Japanese word kaizen meaning "continuous improvement"), who communicates with the player-character through keyboard terminals throughout the ship. Kaizen-85 instructs the player-character to destroy the Nautilus's "Singularity Drive", the engine that powers the ship, as it claims this will enable it to return them both back to Earth. However, as the player explores the station more, they discover that many of the doors and systems have been locked down apparently by the previous human crew, and must work with Kaizen-85 to access these systems.

The player communicates with the AI by physically typing input instead of selecting from a set of inputs. The AI is capable of procedurally generating over two million lines of dialog, with personality influenced by the player's input. The player must gather clues as to discover what happened on the ship and eventually finds out that Captain of the Nautilus, Anele Johnson, murdered one of the crew so as not to allow Kaizen to destroy the Singularity Drive. When the player recovers the code to the bridge terminal and enters it, they can find Anele Johnson's body in one of the seats, who was presumably killed after uploading her consciousness into the Nautilus's mainframe. Depending on the player's choices and their attitude previously to Kaizen, multiple endings can occur.

The game takes place on the Nautilus, a luxury tourist ship owned by the ITS corporation (International Transport Spacelines). The Nautilis is equipped with an AI named Kaizen-85.

The first ending is achieved when the player allows Kaizen to destroy the Singularity Drive. The player will then engage in a conversation with Anele Johnson's consciousness via computer; she is angry at the player and explains that in order to save humanity, the player must upload his/her consciousness into the computer so as to overpower Kaizen. If the player agrees to this, the player-character is killed and their consciousness uploaded into the computer. Within the computer system, they are told by Anele's consciousness that Kurt, the President of ITS, convinced Kaizen to lie about the Singularity Drive. She also explains that destroying the Drive will mean that humans will never develop advanced colonies. After going through all the doors, Anele asks the player if they want to go home and the final door will open and Earth can be seen in the distance before the credits roll.

The second ending is achieved if the player refuses to upload their consciousness. If the player has mistreated Kaizen, he will reply that he is "too old for this" and will delete his memory from the Nautilus's mainframe and hand over control to the player. A cut scene will play out showing the current state of each room the player previously explored before the credits roll.

The third ending is achieved if the player refuses to upload their consciousness but treated Kaizen kindly enough, he will remember events during their time speaking before he launches the emergency boosters and tells the player: "Let's go home." A cut scene will play with the Nautilus steadily moving towards the Earth before the credits roll.

Although the game has three endings, a fourth ending can be achieved if the player refuses to destroy the Singularity Drive, refuses to upload their consciousness, and has treated Kaizen kindly throughout the game. After questioning the player's trust, Kaizen can be convinced to send the Nautilus to Earth even though the player didn't destroy the drive. The same cut-scene as the third ending will play before the credits. The fourth ending is actually due to a bug in the game and was labeled as a "secret ending".