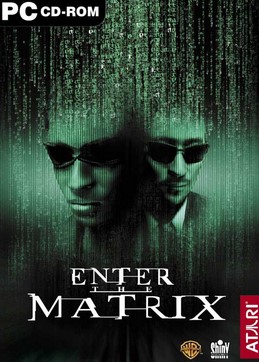 Enter the Matrix is an action-adventure video game developed by Shiny Entertainment and published by Infogrames, released under the Atari brand name. It was the first game based on The Matrix series of films. Its story is concurrent with that of The Matrix Reloaded, and features over an hour of original footage, directed by The Wachowskis and starring the cast of the film trilogy, produced for the game. It sold one million copies in its first eighteen days of release, 2.5 million over the first six weeks, and ultimately 5 million copies. The success led to the game being re-released for multiple consoles' budget brands, with the PC version getting a DVD-ROM version.

Enter the Matrix gives players control of two of the supporting characters from Reloaded and Revolutions, Ghost (Anthony Wong) and Niobe (Jada Pinkett-Smith), members of the same group of rebels as Morpheus, Trinity, and Neo, the protagonists of the series. Niobe is the Captain of the Logos, the fastest ship in the rebel fleet. Ghost is the ship's first mate, weapons guru, and a deep-thinking, philosophical assassin. The game takes place at roughly the same time as the events in Reloaded.

Players play as either Niobe or Ghost, each of whom have slight variations during their story. Most levels involve controlling players in a third-person perspective, using guns and fighting skills to defeat opponents and complete level objectives. At any time, players can activate bullet time (called "Focus" in the game) which slows down time, giving players the ability to perform actions such as shooting in midair and dodging bullets. Some levels involve one on one martial arts fighting against single opponents. In levels involving vehicles, such as driving a car or piloting the Logos, the style of game play depends on the selected player, with Niobe maneuvering the vehicles to avoid obstacles, whilst Ghost takes control of a gun to fight off incoming enemies. A hacking system allows players to enter codes, which can unlock special skills, weapons and secrets, such as a 2-player versus mode.

The story begins with Niobe, captain of the Logos, and Ghost, her first mate, retrieving a package left in the Matrix by the crew of the recently destroyed rebel ship Osiris. After being pursued by Agents, Ghost and Niobe escape from the Matrix with the package, which turns out to be a message to the human city Zion, warning them that the machines are approaching with an army of Sentinels. Niobe and Ghost are tasked with calling the rest of the ships back to Zion to coordinate a defense.

With this in mind, the captains of the various ships hold a meeting in the Matrix to decide on how best to defend themselves. During the meeting, Agents attack the building they are in, although Niobe and Ghost are able to help their allies escape. They then encounter the Keymaker, a program capable of accessing any area in the Matrix, who leads them to safety through a door he created. The Keymaker gives the two a key that they are supposed to give to Neo. However, the key is stolen by henchmen of the Merovingian, a program created during the early days of the Matrix who now operates an illegal smuggling ring within the program. Ultimately, the Merovingian destroys the key, but Niobe and Ghost are able to escape, when the Keymaker realizes that it is too early for the key to be given to Neo.

Niobe later volunteers to go find the Nebuchadnezzar, the ship captained by Morpheus, upon which Neo serves, and the only ship yet to return to Zion. Upon finding the ship and its crew, and helping them escape from the Matrix, Niobe and Ghost agree to help in Neo's mission against the machines, agreeing to destroy a power plant. After this mission is completed, the Oracle, a program that often gives the humans advice, requests that the player character come and speak to her. After their conversation, the player is confronted by Agent Smith, a rogue Agent that seeks to destroy both the human and machine worlds. The player character barely escapes from the hundreds of Smith copies and the Matrix. Once out, the Logos is attacked by the machines. They defeat the machines by setting off an EMP, which disables their own ship in the process. The game ends with Niobe and Ghost waiting in the Logos, hoping that they will be rescued. The two wonder what's coming but believe that it will be "a hell of a ride."