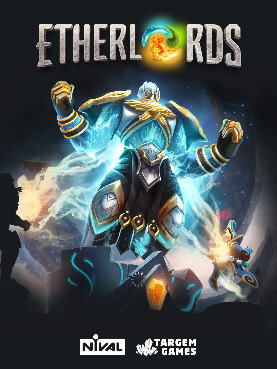 Etherlords (Russian: Демиурги) is a series of fantasy turn-based strategy and card-dueling video games for the PC, by Russian developer Nival Interactive. The first game was published November 12, 2001 by Ravensburger Interactive Media under their mature game label Fishtank Interactive. Prior to worldwide release it was released in Russia (November 9, 2001) as Demiurges (Russian: Демиурги). It was followed two years later by a sequel, Etherlords II, which was published in Europe by DreamCatcher Interactive and in North America by Strategy First. Nival has stated that a third game isn't out of the question, but so far nothing has been announced.

The game features a card-based dueling system that borrows heavily from Magic: The Gathering. While the game can be played in a pure dueling mode, the major appeal of Etherlords stems from the scenario mode which utilizes a strategy/adventure map, similar to the one used in Heroes of Might and Magic. Nival later became the developer of HOMM 5.

The world is governed by a force known as ether and it is wielded by the representatives of chaos, kinetics, synthesis, and vitality. The leaders of the four factions vie for supremacy, with the ultimate goal of transcending into the fabled White Lord, the master of all ether.

In Etherlords I, you may select between two campaigns: Kinet/Vital or Chaot/Synthet. Some of the maps are shared between the two campaigns, and you simply assume the role of whichever faction you selected. The final mission is one such mission. It also requires that you break with your allies and choose a single faction, and therefore a single avatar, to face the White Lord. The White Lord himself, being a master of all ether, uses spells from multiple schools. Notably he uses a deck that is heavy on Synthet spells, augmented by top picks from the other schools. Upon defeating the White Lord, the victor ascends and becomes the new White Lord.

In Etherlords II, Diamanda mysteriously returns from the mists of legend. She was mentioned in passing at the end of the Kinet/Vital campaign in Etherlords I. A Kinet hero who was captured by the Synthets for experimentation, she appears now as a hybrid Kinet/Synthet spreading the Pale Plague, a sinister disease which drains beings of their energy. You begin the game as either the Vitals or Chaots, and in a twist, each of these factions' campaigns leads to the campaigns of their enemies—so the campaigns are effectively a choice between Vitals/Synthets or Chaots/Kinets. After completing the main campaigns, you then play as Diamanda. Here you discover that the force behind the Pale Plague is actually the reigning White Lord, who wishes to remain in power for eternity and can only do so by inflicting the world with the Pale Plague. Diamanda was resurrected as a mindless slave for this purpose, but she eventually recovers her sense of self and makes the ultimate sacrifice to stop the White Lord's plans.

There are four factions in Etherlords. The Kinets and Vitals can be considered the protagonists, while the Chaots and Synthets can be considered the antagonists, as represented in each faction's art style and the single-player campaigns. Four races dominate the lands of the Etherlords. Each race has its advantages, and each has its ambitions, but all want to dominate. From the Vitals attuned to natures and grace, to the vulgar Chaots, the races encompass all the colors of Ether.

Race of Ether of Chaos

The Chaots are a tribal race of brutish warriors. Their connection to fire and lightning is represented by a multitude of spells that cause direct damage to creatures. Common Chaos creature types include kobolds, orcs, rats and bats. Some say the Chaots are the most powerful heroes of all. But those that speak thus would be wrong. For it is not that Chaots are more powerful than other races, but rather that their power is more vulgar. Chaots believe in the attack, and use their powerful spells and unholy minions to unleash a never-ending assault on their enemies.

Race of Ether of Motion

The Kinets are regal, winged beings with an association to air and water. The Kinets possess an arsenal of spells that delay enemy actions, including discard effects. This is somewhat necessary because all of the Kinet's low-cost creatures have only 1 or 2 points of toughness. Common Kinetic creature types include aviaks (birdmen), spirits, and lamias (naga). Slender and fast, the Kinets prefer speed over brute force. They are an intelligent race and value knowledge over force, and their allies -from the aviaks to the Lamias- feel the same. A Kinet hero will parry his opponent's attacks, wearing him down with endless counterattacks until at last his opponent succumbs.

Race of the Ether of Synthesis

The Synthets are cyborgs and as such they employ machines and technology. Their spells utilize biological attacks that steadily cause damage over time. Synthetic creatures are mechanical, and common types include worms, mechs, and even dinosaurs. The Synthets are a strange race, part machine, part human -a race of living beings that eschews the living in favor of the machine. As such they consider their allies the strange, pseudo-machines of the Etherlords universe. From quick Wurms to the powerful Cutters, the Synthets field an odd, but aggressive, army.

Race of the Ether of Vitality

The Vitals are a druidic people who possess an affinity for plants and insects. Bursts of ether allow them to cast larger spells more quickly. They also have many spells to gain life. Common Vitality creatures include ticks, treants, and bees. The Vitals are nature's own, and are close to the currents that run through the green-leafed woods, and speaking streams. A looking-good people, the Vitals rely on nature's magic for their power, and claim the creatures of the woods -from the tick to the snake- as their allies. Their attacks are balanced, employing both a clever defense and relentless assault.