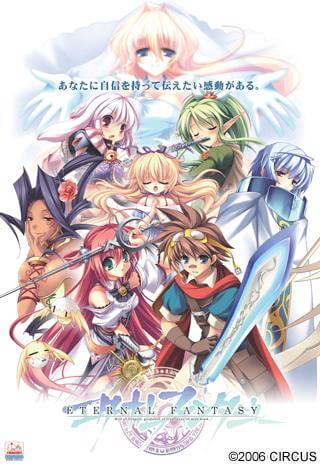 Eternal Fantasy (エターナルファンタジー Etānaru Fantajī) is a Japanese adult visual novel developed by Circus, released on November 22, 2007 for Microsoft Windows, as both a standard edition and a limited edition. The gameplay in Eternal Fantasy follows a linear plot line, which offers pre-determined scenarios and courses of interaction, and focuses on the appeal of the main female characters, but differs from traditional visual novel in that the player is allowed to navigate in an overworld map from a top-down perspective, and its utilization of a combat system.

The gameplay in Eternal Fantasy utilizes three different styles of gameplay. The game features an overworld map and a combat system, typical to role-playing video games, and a visual novel system. While on the overworld map, a scaled-down depiction of the game's fictional landscape, the player is allowed to navigate between locations from a top-down perspective. Upon entering locations in the overworld map, the game shifts to a visual novel-style gameplay. Gameplay in this segment requires little player interaction as most of the duration of the game is spent on simply reading the text that appears on the screen, which represents either dialogue between characters, or the inner thoughts of the protagonists. Every so often, the player will come to a "decision point" where he or she is given the chance to choose from options that are displayed on the screen, typically two to three at a time. Gameplay pauses at these points until the player makes a choice, and depending on which choice the player makes, the plot will progress in a specific direction.

At times, the player will be engaged in combat. Combat in Eternal Fantasy utilizes a real-time battle system, with the player taking control of one member of the party, while other characters are controlled by AIs. Each character and enemy has a certain number of hit points. Players may reduce hit points by wounding targets using different types of physical and magical attacks, and may also restore their hit points by healing themselves using items.

When a character loses all his or her hit points, he or she faints, and if all of the player's characters lose all of their hit points, the game ends, and the player may either restore their progress from a previously saved location or immediately before battle. Attacks from characters are restricted by a countdown gauge similar to Square Enix's Active Time Battle system, and players can only issue attacks and place movements when the gauge is completely empty.

Eternal Fantasy is the tenth game developed by Circus' Northern subdivision not counting re-releases, and is their first game not in the Da Capo canon since AR: Forgotten Summer. Eternal Fantasy is notable for having a large development team for a visual novel. The producer for the visual novel is Tororo, who has also produced and composed for most of Circus Northern's past titles. Planning and the original story was done by Futsumamu, who also contributed in character designs, along with Eko, Natsuki Tanihara, Soba Aki, Narumi, and Mochi Chinochi. Scenario work was split between six people, Masaki Sonoda, Fumihiko Kuwabara, Shingo Hifumi, Aiha, Mori no Me, and Shin Gotō.

A free demo version of Eternal Fantasy was released online on November 10, 2007. The demo introduced players to the characters and the gameplay. The full game was released on November 22, 2007, as both a limited edition and a regular edition. The limited edition contained the game itself, a 64-page book containing development materials, a fully colored 20 page illustration book, a special original soundtrack disc, and a map of the Gladio peninsula; the regular edition did not contain the aforementioned extras.

An internet radio titled D.C. to EF being produced by Onsen began streaming online on October 11, 2007. The show is based on Eternal Fantasy and Da Capo II, and is hosted by Ai Hinaki, Hijiri Kinomi, and Aya Tachibana, who voiced Locomoco, Farte, and Arcie in the visual novel respectively. Two sets of two CDs, each containing thirteen episodes previously streamed online and a special episode was released on August 15, 2008.

According to a national ranking of bishōjo games based on amounts sold in Japan, Eternal Fantasy was placed at the fifth place for the most pre-ordered bishōjo games during mid-September to mid-October prior to the release of the game. After the game was released, Eternal Fantasy premiered at the first place out of fifty during the month of November, and was then dropped to the twenty-eighth the following month, before dropping to the forty-sixth place the following month, making its final appearance on the charts.