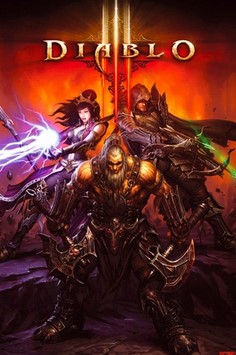 Diablo III is a dungeon crawler hack-and-slash action role-playing game developed and published by Blizzard Entertainment as the third installment in the Diablo franchise. It was released for Microsoft Windows and OS X in May 2012, the PlayStation 3 and Xbox 360 in September 2013, the PlayStation 4 and Xbox One in August 2014, and the Nintendo Switch in November 2018. In the game, players choose to play as one of seven character classes – Barbarian, Crusader, Demon Hunter, Monk, Necromancer, Witch Doctor, or Wizard – and are tasked with defeating the Lord of Terror, Diablo, as in previous games in the series.

Set items are a subtype of legendary items which provide additional, cumulative bonuses if multiple items from the same set are simultaneously equipped. Higher level monsters tend to drop higher level items, which tend to have higher base stats and bonuses.

The proprietary engine incorporates Blizzard's custom in-house physics, and features destructible environments with an in-game damage effect. The developers sought to make the game run on a wide range of systems without requiring DirectX 10. Diablo III uses a custom 3D game engine in order to present an overhead view to the player, in a somewhat similar way to the isometric view used in previous games in the series. Enemies utilize the 3D environment as well, in ways such as crawling up the side of a wall from below into the combat area.

As in Diablo II, multiplayer games are possible using Blizzard's Battle.net service, with many of the new features developed for StarCraft II also available in Diablo III. Players are also able to drop in and out of sessions of co-operative play with other players. Unlike its predecessor, Diablo III requires players to be connected to the internet constantly due to their DRM policy, even for single-player games.

An enhanced quest system, a random level generator, and a random encounter generator are used in order to ensure the game provides different experiences when replayed.

Unlike previous iterations, gold can be picked up merely by touching it, or coming within range (adjusted by gear) rather than having to manually pick it up. One of the new features intended to speed up gameplay is that health orbs drop from enemies, replacing the need to have a potion bar. The latter is replaced by a skill bar that allows a player to assign quick bar buttons to skills and spells; previously, players could only assign two skills (one for each mouse button) and had to swap skills with the keyboard or mousewheel. Players can still assign specific attacks to mouse buttons.

Skill runes, another new feature, are skill modifiers that are unlocked as the player levels up. Unlike the socketable runes in Diablo II, skill runes are not items but instead provide options for enhancing skills, often completely changing the gameplay of each skill. For example, one skill rune for the Wizard's meteor ability reduces its arcane power cost, while another turns the meteor to ice, causing cold damage rather than fire.