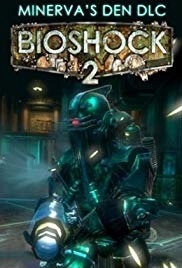 BioShock 2: Minerva's Den is a single-player downloadable content (DLC) campaign for the 2010 video game BioShock 2. The game is a single player first-person shooter in which the player takes on the role of an Alpha Series Big Daddy with the alias Sigma, who must travel through Rapture's main security station, Minerva's Den, in order to download a copy of the city's main computer which is located within.

Minerva's Den takes place in the fictional underwater city of Rapture in the year 1968, eight years after the events of Bioshock. The story does not reveal where Rapture is, nor the approximate size of the city, other than that it is enormous.

Minerva's Den follows a prototype Alpha Big Daddy referred to as Subject Sigma. Guided by Dr. Brigid Tenenbaum and Charles Milton Porter, the founder of Rapture Central Computing, Sigma makes his way to the Thinker, a supercomputer that maintains every automated system in the city. While developing the Thinker, Porter tried to give it a personality modeled on that of his late wife Pearl. His partner, Reed Wahl, found this to be a waste of time; he instead became obsessed with what he believed was the Thinker's ability to predict the future. To take total control of the Thinker, Wahl framed Porter for treason against Rapture's leader, Andrew Ryan, thus resulting in his arrest and disappearance. Through radio communication, Porter instructs Sigma to travel through Minerva's Den (where the Thinker is located) and retrieve its blueprints from Wahl so that he can rebuild it on the surface. As Sigma progresses, the environment becomes increasingly more threatening due to the Thinker's sophisticated defense system, as well as interference from Wahl and his private army of Splicers. Throughout all this, Sigma's real identity remains a mystery that is not touched upon until the final moments of the game. When Sigma reaches the Thinker and completes his mission, the Thinker recognizes Sigma as Charles Milton Porter, thus revealing his true identity. It is later explained by Dr. Tenenbaum that Milton's "instructions" throughout the duration of the game were actually from the Thinker that was imitating the voice of one of its creators. After Sigma kills Wahl, he and Tenenbaum return to the surface in a bathysphere; Tenenbaum is able to undo Sigma's programming and restore his original human body. Porter visits his wife's grave and leaves a letter in which he apologizes for trying to bring her back using the Thinker, and that he has finally decided to let her go.

True to other Bioshock titles, Minerva's Den is a first person shooter. All supplies have to be collected throughout the game, limiting the amount of ammo, health, and ADAM a player can have at one time. The player also has a limited carrying capacity, meaning that only a certain number of items can be carried at one time.

The player and NPCs have the ability to slightly change the environment around then. If a wall, ceiling, or floor is hit or shot, a hole will appear in that spot.

Many items and parts of the environment of the game are affected by physics. Smaller items can be kicked, thrown, and knocked over by the player and some of the NPCs (non-playable characters). Water dynamics also affects the player's movements, being that when underwater, the player will have longer steps and a slower fall time. Specific to Minerva's Den are the mechanics of the "Gravity Well" plasmid. It allows the player to throw an artificial black hole anywhere within a certain range, in which small items and NPCs will be sucked in until the black hole dies and expels the matter.

In Minerva's Den, there are additions that differentiate it from both Bioshock and BioShock 2.

As said above, the new plasmid, "Gravity Well", was introduced. Gravity Well allows the player to throw a black hole anywhere within a certain range. Small items and NPCs then get pulled in until the black hole expels the matter. Gravity Well does not affect the player or larger objects in the area.

Minerva's Den also introduces the player to a new weapon as well, the Ion Laser. The Ion Laser shoots a continuous beam of the selected ammunition, either laser cell, thermal cell, or burst cell. The mechanics of the Ion Laser are reminiscent of the Chemical Thrower from BioShock, but with a longer range.

Electromagnetic locks were added to certain doors to act as a barrier for the player. The locks are impossible to open until the player obtains "Gravity Well", which they can use to remove the lock's power source.

All games from the serie "BioShock"