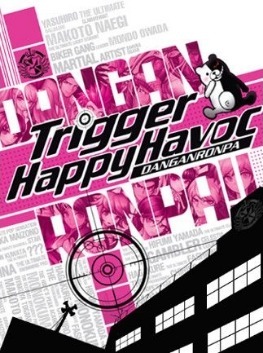 Danganronpa: Trigger Happy Havocb is a visual novel adventure game developed and published by Spike as the first game in the Danganronpa series. The game was originally released in Japan for the PlayStation Portable in November 2010 and was later ported to Android and iOS in August 2012. Danganronpa was localized and published in English regions by NIS America in February 2014, and for PC, Mac and Linux in February 2016.

A sequel, Danganronpa 2: Goodbye Despair, was released in 2012. A compilation of both games, titled Danganronpa 1・2 Reload, was released for PlayStation Vita in Japan in October 2013, and worldwide in March 2017. Two manga adaptations, two spin-off novels, an anime television adaptation by Lerche, and a stage adaptation of the game have also been produced.

Danganronpa: Trigger Happy Havoc casts players in the role of Makoto Naegi, a student of Hope's Peak Academy, who finds himself trapped in a game of mutual killing among his peers. Gameplay is similar in style to the Ace Attorney series, revolving around investigation and finding contradictions, albeit with an emphasis on faster gameplay. Each chapter of the game features two styles of gameplay; School Life, in which the player explores the academy and progresses through the story, and the Class Trials, where the player must deduce the culprit of a crime.

During School Life, the player can explore the school grounds in first-person perspective, with more areas of the academy becoming available as the game progresses. Whilst in one of the various rooms, players move a crosshair cursor which is used to initiate conversations with characters or examine parts of the environment. Examining certain objects yields Monokuma Medals, which can be used in a capsule machine in the school shop to unlock presents. School Life is divided into two sections; "Daily Life" and "Deadly Life". In the Daily Life sections, players converse with various characters and move the plot along. Certain comments can be 'reacted' to reveal new information. In designated 'Free Time' segments, players can choose to hang out with specific characters and give them presents, which in turn reveals more information about them and unlocks various Skills that can be used in the Class Trials.

When a crime scene is discovered, the game shifts to the Deadly Life section, in which the player must search for clues throughout the academy. Evidence and testimonies gathered are stored in the player's e-Handbook, where players can also save their game. When all possible evidence is located, the game moves on to the Class Trial. Prior to a Class Trial, players can assign any Skills they have unlocked, which can assist them during gameplay.

The Class Trials are the main section of the game, in which the students must discuss amongst themselves who the culprit is. With the exception of occasions where the player must answer a multiple choice question or present a piece of evidence, Class Trials consist of four main styles of gameplay: Nonstop Debate, Hangman's Gambit, Bullet Time Battle and Closing Argument. The most common of these is the Nonstop Debate, where characters will automatically discuss their thoughts on the case, with potential 'weak points' highlighted in yellow. During these sections, the player is armed with "Truth Bullets", metaphorical bullets containing evidence relevant to the discussion. In order to break the debate, the player must find a lie or contradiction amongst the weak points and shoot it with a bullet containing the evidence that contradicts it. Players can also silence disruptive purple chatter to earn extra time and utilise a Concentration meter to slow down the conversation and make shots more easily. These sections become more difficult as the game progresses and more possible weak points are added, with later trials occasionally requiring the player to use one remark as ammunition against another. Hangman's Gambit is a shooting puzzle section in which the player must shoot down specific letters that spell out a clue. Bullet Time Battle is a one-on-one debate against another student featuring rhythm style gameplay. As the opponent makes remarks, the player must press buttons in time to the beat to lock onto the remarks and shoot them down. Finally, Closing Argument is a puzzle in which players piece together a comic strip depicting how a crime went down. The players Influence amongst the other students is represented by hearts, which is reduced whenever the player makes errors in shooting contradictions or presenting evidence and is slightly replenished when correct evidence is presented. The game ends if the player loses all of their Influence, or if they run out of time during a segment. At the end of a trial, players are ranked on their performance, with additional Monokuma Medals awarded for high ranks.

The PlayStation Vita, PlayStation 4, and PC version features an exclusive School Life mode, based on the Island Mode introduced in Danganronpa 2, which is unlocked after clearing the game once. In this 'What If?' mode, Monokuma tasks the students with building several backup units of himself over several days. Each day, the player assigns students to scavenge rooms for necessary materials needed to build each concept, keep the school clean, or rest up to recover energy. During Free Time, players can either hang out with the other students to unlock skills, just like in the main game or use Trip Tickets earned from completed concepts to take them on trips. The Vita version also features high-resolution graphics and optional touchscreen controls.

Danganronpa takes place at an elite high school named Hope's Peak Academy (希望ヶ峰学園 Kibōgamine Gakuen), which accepts talented "Ultimate" students (超高校級 chō-kōkō-kyū, lit. Super High School Level) of the highest caliber in various fields each year. Makoto Naegi, a fairly optimistic but otherwise average student, is selected in a raffle and chosen to enroll into the academy as the "Ultimate Lucky Student". However, when Makoto arrives at the Academy, he loses consciousness and wakes up locked inside the school, where he meets fourteen other newly picked Ultimate students who are in the same situation as him. A sadistic, remote-controlled bear named Monokuma appears before them, telling them they will be imprisoned in the academy for the rest of their lives, and that they will be put to death if they violate any of the school's rules. He states that there is only one way that a student can leave the academy: murder another student and avoid being identified as the culprit.

After a murder occurs and the remaining students are given some time to investigate it, a "class trial" (学級裁判 gakyū saiban) is held, in which the remaining students must determine amongst themselves who the killer is. Makoto frequently takes the role of arbiter of the trial, providing most of the logical insights. Makoto receives assistance from Kyoko Kirigiri, a mysterious and distant girl with no recollection of her past, but possessing keen observational and deductive skills. In addition, prior to each murder, Monokuma provides the students "motives" to commit a murder, such as implying harm to their families, threatening to reveal embarrassing secrets if no one commits a murder, and offering a massive cash reward to the next murderer. Several murders are committed in the game's first four chapters: Makoto's childhood friend is murdered after her plans to murder her would-be killer and frame Makoto for it fail; a crossdressing student pretending to be female was murdered out of envy by an ex-biker gang leader; a gambling expert manipulates a fanfiction writer into killing the student council president, before she kills the writer; and a student commits suicide in the interest of saving her friends, but a suicide note forged by Monokuma left at the scene misleads the remaining students into thinking that the suicide was a response to the stress of events. In the first 3 cases, the culprits are all exposed and executed, and in the fourth case the truth of the suicide is revealed.