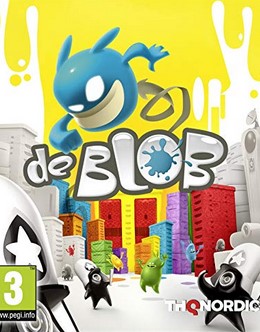 De Blob (stylized as de Blob) is a 2008 platform-puzzle video game. The game has players explore and liberate an alien city from the evil, monochromatic INKT Corporation that has taken over the city and outlawed all color and fun from daily life. Playing as de Blob, players embark on a quest to re-animate the fictional place of Chroma City and free it from the INKT Corporation by splattering buildings, landmarks, and citizens with color.

De Blob was developed by Blue Tongue Entertainment for the Wii, while a cancelled version for the Nintendo DS was being developed by Helixe, with both versions being published by THQ. The game was originally scheduled for a February 2008 release, but it was delayed and then released on 22 September 2008 for the Wii. An iOS adaption of the game was released on 8 July 2008.

On 3 March 2017, THQ Nordic unveiled De Blob for Microsoft Windows, ported by BlitWorks. This game was a surprise announcement to debut in PAX East 2017. On 25 October 2017, THQ Nordic announced the game would release for PlayStation 4 and for Xbox One on 14 November 2017. A Nintendo Switch port was released on June 26, 2018.

The player character — de Blob — starts out as a ball of clear "water". de Blob is free to roll around and collect paint from Paintbots in the three colors of red, yellow and blue, which can be combined into green, orange, purple and brown. de Blob then merely has to touch a building, lamppost, billboard, or other object for the entire surface of said object to be smeared in his current color. As he colors the city, the game's soundtrack, featuring live bands which recorded slow and fast versions of each "lick" (each hit), gradually adds more instrumentation as well as an additional "layer" of sound corresponding to de Blob's current color—being red usually adds a saxophone solo to the music, for example. As de Blob collects paint, his size increases to a maximum of 100; each object he paints costs a paint point, as does attacking enemies, while touching water makes de Blob remove his color.

While de Blob is free to paint, there are various missions which can or must be completed. These missions are given by various members of the Color Underground and include painting certain buildings certain colours and transforming a landmark with enough of a certain color of paint (for example, 30 yellow paint points). Each of the 10 levels have a main landmark to paint, which may require more than one color and more paint points than usual.

There are various hazards to avoid, however. Pools of ink turn de Blob black and cause him to lose paint points constantly; when he loses all of his paint points, he loses a life. Ink must be washed out with water. The INKT forces, Inkies, will send out footsoldiers to stop de Blob, as well as other forces—handheld ink guns, turrets, tanks, jetbikes and even Inkies that are immune to all but a specific color. There are also other hazards, such as hotplates, electric plates and spikes.

As de Blob paints Chroma City and completes missions, points are accumulated. Each gate separating the player from the next part of a stage can be opened by reaching a certain number of points. Once the final gate is open, the stage can be completed.

Told through a combination of pre-rendered cinematic sequences and in-game dialog, de Blob tells the story of Chroma City, its invasion by the INKT Corporation and its subsequent liberation by the titular Blob and the Color Underground.

Initially a lively and colorful city populated by its equally colorful and diverse citizens, the Raydians, Chroma City is suddenly invaded by the INKT Corporation. A corporate military dictatorship, INKT is led by the villainous Comrade Black and dedicated to the eradication of color through its "War on Color". Chroma City quickly falls to the invading army of Inkies and color-draining Leechbots, leaving its landscape barren, its flora withered and its fauna in hiding. The citizens are rounded up and turned into "Graydians", encased in homogeneous gray prison suits distinguished only by a bar code on the back of each shell. The Graydians are forced to serve as both menial labor and as a living resource of ink, the latter of which is mined literally from their sadness.

Blob witnesses the takeover of Chroma City from his jungle retreat and goes into action, first rescuing the only remaining pocket of resistance, the Color Underground. Blob joins the group, and under their orders, begins to win back sections of the city and arouse the vicious ire of Comrade Black. In response, Black orders everything from propaganda campaigns to the creation of super soldiers in an attempt to stop Blob, though to no avail.

With nearly all of Chroma City in control of the Color Underground, Comrade Black desperately orders all his troops to retreat to his spaceship in Lake Raydia, and attempts to launch all the stolen color into a black hole where it will be lost forever. However, Blob manages to stowaway onto the spaceship and defeat Black, then detonates a device that devours the spacecraft in a burst of color and whimsy. With the Raydians finally safe, Blob returns to his jungle retreat, napping on a tree as he was at the story's beginning.