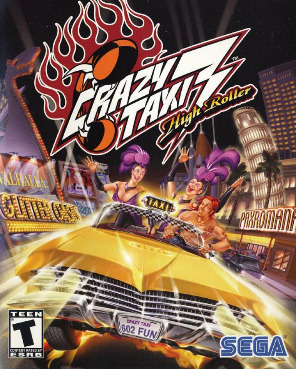 Crazy Taxi 3: High Roller is the third video game in the Crazy Taxi series, and was released for the Xbox and Microsoft Windows, with also an arcade release under the name Crazy Taxi: High Roller for the Chihiro game board.

The game consists of three locations:

West Coast (from Crazy Taxi) Based on San Francisco

Stages are improved graphically and are tightened and updated for full use of the gameplay elements.

By completing all of level 1, maps of the locations are available on the menu which includes all the destinations and short-cuts. Completing level 2 will provide the player with three more different types of vehicle to ride on: Stroller, Bike and Carriage. Completing level 3 will allow the player to use any cabbie in any map.

Hitmaker had tried to develop an on-line version of Crazy Taxi, to be called Crazy Taxi Next exclusively for the Xbox, which, besides multiplayer game modes, would have included night and day cycles, each with a different set of passengers and destinations, while reusing and graphically updating the maps from Crazy Taxi and Crazy Taxi 2. Ultimately, both multiplayer and day/night cycles were dropped and work on Crazy Taxi Next was transferred to Crazy Taxi 3: High Roller, which included some of the nighttime driving concepts suggested by Next.

In 2003, High Roller was ported to the arcade via the Xbox-based Chihiro system board. Some versions of this game allow the player to actually win money back from the machine. These versions also include a non-paying version of the game with different difficulty levels.

The Xbox version received "average" reviews according to video game review aggregator Metacritic. In Japan, Famitsu gave it a score of 32 out of 40.