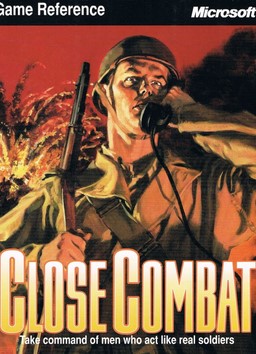 Close Combat is a 1996 real-time computer wargame developed by Atomic Games and published by Microsoft. Set during World War II, it simulates the conflict between the United States' 29th Infantry Division and Germany's 352nd Infantry Division after the Invasion of Normandy. The player controls an artificially intelligent army whose behavior is dictated by psychological models: each soldier makes decisions based on the circumstances of the battlefield and can disobey the player's orders.

Close Combat began production at Atomic Games under publisher Three-Sixty Pacific in 1992. The following year, Atomic migrated with the project to Avalon Hill, as part of Avalon's attempt to bolster its computer game business. It was originally announced as Beyond Squad Leader, a tie-in to Avalon's million-selling Squad Leader board wargame franchise. However, the companies' relationship was troubled, and Atomic broke away after a high-profile departure at its publisher. Renaming the project Close Combat, Atomic continued production with Microsoft and ultimately released the game in July 1996. Military psychologist Dr. Steven Silver worked with the team to increase the accuracy of Close Combat's psychological modeling.

With sales of 200,000 copies, the game was a commercial success. Critics offered praise to its visuals, and several commended its innovation. Conversely, its slow scrolling was often criticized, and some labeled its use of psychological models as a fundamental mistake. The game started the Close Combat series, which encompassed 17 titles and sold in excess of 5 million copies by 2018. Atomic developed four sequels to Close Combat by 2000 and later created Close Combat: Marines for the United States Marine Corps. Following the company's sale to Destineer, the franchise has continued at other developers under publisher Matrix Games since 2007.

Close Combat is a real-time computer wargame that takes place from a top-down graphical perspective, in contrast to the isometric visuals used in strategy games such as Warcraft II: Tides of Darkness. A simulation of short-distance battles during World War II, Close Combat recreates the conflict between the United States' 29th Infantry Division and Germany's 352nd Infantry Division in the six weeks after the Invasion of Normandy. The player is able to control either side and manages infantry, crew-served weapons and armor via six commands: move, fire, move fast, defend, hide and smoke. Tactics such as cover, suppression and unit positioning are required to win; soldiers are vulnerable in large groups and while charging. The game's battles play out in bocage environments, open plains, and towns such as Saint-Lô.

Each soldier in Close Combat behaves according to a simulated psyche, which influences his actions, combat readiness, and obedience to the player's commands. Mental and physical combat stresses impact a soldier's behavior and morale; an exhausted or scared squad may grow reluctant to shoot or move, or may fire inaccurately. A soldier under severe stress can become shell shocked and entirely unable to fight, or enter a berserk rage. Units will often disobey poor or dangerous orders, such as exiting cover without proper defense measures. The game's artificial intelligence (AI) system allows even an unattended squad to continue fighting and using tactics.

Close Combat allows players to fight 39 small-scale confrontations or engage in a long-form campaign, which extends from the Normandy landings to the Battle of Saint-Lô. The 29th Infantry Division wins the campaign by claiming Saint-Lô in under 43 days, while the German side focuses on delaying the United States. Players are given pre-selected forces at the start of each mission, and are scored based on the number of enemy units destroyed and objectives captured at the end. In addition to single-player battles against a computer opponent, the game contains multiplayer support for up to two players.