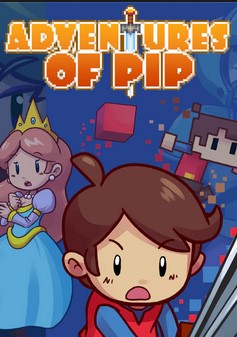 Adventures of Pip is a 2D side scrolling action platform video game developed and published by independent video game developer Tic Toc Games. The game launched in June 2015 for Microsoft Windows, OS X, and Wii U and in July 2015 for iOS. Xbox One and PlayStation 4 versions were released in August 2015.

In Adventures of Pip, the player plays as Pip, a single pixel born into a world of hi-res and lo-res characters. As Pip defeats his enemies, he gains the ability to evolve into an 8-bit hero and later a 16-bit hero. Each evolution has its advantages and disadvantages. Pip must switch between his evolutions to complete levels. Players will need to evolve and devolve, wall jump, run, shove, break blocks, float, collect, and fight their way through bosses and henchmen till they get to the Evil Queen DeRezia.

An evil witch has come and turned the King and Queen into pixels and kidnapped Princess Adeline. It’s up to Pip to venture forth and navigate the strange landscapes to rescue the damsel in distress from the clutches of Queen DeRezzia.

Adventures of Pip has received mostly positive reviews from critics, with the Wii U version scoring 78/100 on Metacritic.

Dermot Creegan of Hardcore Gamer gave the game a 4 out of 5 saying, "Adventures of Pip is a delightful little platformer full of charm, challenge and impeccable level design." Andrew Fitch from Electronic Gaming Monthly rated the game a 8/10 saying, "Tic Toc Games’ impressive pedigree at WayForward is on full display in Adventures of Pip—one of the only problems is that it’s not quite as feature-rich as you’d like."