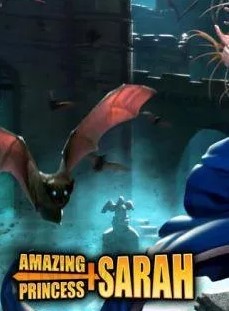 Amazing Princess Sarah is an indie platform-adventure video game developed and released by Haruneko for the Xbox 360's Xbox Live Indie Games, the PC Windows (Steam and Desura), and Windows Phone 7/8 platforms in 2014. On June 17 of 2015, it was announced that the game was selected to become a part of Microsoft's ID@Xbox program.

Demon queen Lilith has seduced and kidnapped the king of Kaleiya. Princess Sarah embarks on a quest to destroy Lilith's forces and rescue her father.

It took the game only 10 days to be Greenlit on Steam. Alex Carlson of Hardcore Gamer gave the PC version of this "underdog...competent, if uninspired indie platformer" a review score of 3/5, opining, "Amazing Princess Sarah is well-worth five bucks if you love old-school gems like Castlevania but if you’re not into that classic retro scene, it will do as much to convince you of the genre’s flaws as it convinces you of its strengths." Crystal Steltenpohl of Diehard GameFAN wrote about the Xbox 360 version, "The (mostly) fun level design, interesting gameplay, and strong visuals bring together an experience that will remind you of older Metroidvania games while keeping it fresh. (...) The game is only $1. It’s practically a steal. If you like these types of games, this is one I wouldn’t recommend passing up on." According to Rob Hamilton of HonestGamers, who gave it a 8/10, "The game's not perfect, but thanks to its low asking price, it's a great way to enjoy a flashback to the games you may have enjoyed during your childhood."