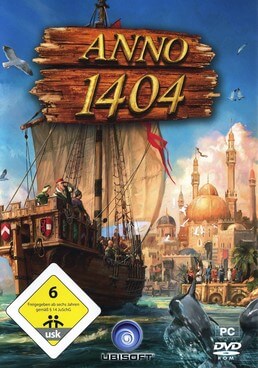 
Anno 1404, known as Dawn of Discovery in North America, is a city-building and economic simulation game with real-time strategy elements, part of the Anno series. Released in 2009, it was developed by Related Designs, produced by Blue Byte, and published by Ubisoft. Anno 1404 is the sequel to Anno 1701 and is followed by the futuristic sequel Anno 2070. Though the game centers on a series of fictional events, the overall concept of the storyline is based upon real life aspects of medieval and renaissance history such as the Crusades, advancements in gothic architecture, construction of cathedrals, and hanseatic trade involving the rise of patrician merchants and early forms of capitalism.

An expansion, titled Anno 1404: Venice, which adds multiplayer and other features, was released on February 26, 2010.

As with other Anno games, the player, at the will of their unnamed country of origin creates and manages their fief aside AI players. The player must colonize islands, plan settlements, set up factories and farms to meet their citizens' needs, enter diplomatic relationships with AI players, and engage in naval and ground combat with others.

One of the main focuses of the game in the "city building setting" sense centers on the construction of monuments, namely a Gothic cathedral and an Arabic mosque. The construction phases of these monuments are dependent on certain preconditions which have to be met in order to continue building. The player also needs to stockpile building material in order to commence such a project. The process of the construction of the cathedral resembles very closely the castle/palace (and Asian Dragon Temple) feature that was displayed in 1404's predecessor, Anno 1701.

Trade is an essential element of forward progress. Occidental populations can not grow past a certain level of success without Spice, and later Quartz, that can only be generated in Oriental lands. Although populations generate taxable income, it is difficult to generate enough gold to make meaningful capital investments without extensive trading. This is simplified by an automatic trading process that allows an island to make resources available to visiting merchant ships.

As players progress through the game, they gain access to naval vessels and troops which allow them to invade and ultimately to defeat other players. Anno 1404 features an updated interface, bigger islands and worlds to explore, a sandbox mode and other features new to the Anno series.

Anno 1404 has several new features that distinguish it from its three predecessors: Anno 1503, Anno 1602, and Anno 1701. These features include:

As was the case in Anno 1701, the game world is divided into two culturally distinct zones. In Anno 1404, these zones are inspired by, though not intended to be historically accurate to, northwestern Renaissance Europe and the medieval Near East, referred to as the Occident and the Orient respectively. One of the major differences between previous entries in the series and Anno 1404 is that players are required to build both occidental and oriental settlements simultaneously in order for the inhabitants of their settlements and available buildings to advance.

Despite the addition of player-managed oriental settlements, the Occident remains the primary focus of the game. The Orient acts more of a trading partner in order for Occidental people to advance in class. In order for this to occur, Oriental goods such as spice, indigo and quartz must be produced and shipped from Oriental colonies.

There are a total of six levels of housing including both occidental and oriental settlements (one more than the levels included in Anno 1701). The four occidental levels are peasants, citizens, patricians and noblemen. The two oriental levels are nomads and envoys. In the Occident, the player starts by building peasant housing, and in the orient, the players start by building nomad housing, both of which advance when conditions are met. These conditions include the acquisition of goods as mentioned above, as well as the construction of specific buildings, such as a debtors' prison, bath house or a cathedral.