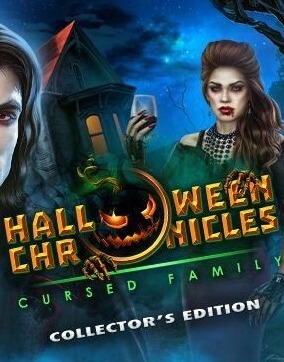 Uncle Pierre has always been a mysterious figure in your family. Your parents never talked about him and no one seems to know what he is up to. So when Uncle Pierre himself invites you to visit him at an amusement park for Halloween, you jump at the chance to get to learn more about this elusive figure. But things are not what they seem and your uncle is acting even weirder than usual, can you survive the evil that lurks in the background?

This sequel starts off at a creepy amusement park, which reminds me of iconic games such as Dreamland, the Weird Park trilogy, and the recent Fright Chasers: Thrills, Chills and Kills. Unfortunately, Halloween Chronicles: Cursed Family quickly regresses to exploring generic locations and faux-horror scenes. Still, if you enjoy the Halloween theme, there is plenty to see in the game.

The storyline in Halloween Chronicles: Cursed Family is not particularly thrilling, but does a good enough job at holding the player’s attention all the way through. As mentioned, the game is well-decorated with Halloween elements, which makes its visuals the hero of the game.

Domini Games‘ love of saturated colors and campy details work really well in favor of Halloween games such as this. The game might not be bone-chillingly creepy, but its family-friendly type of horror is definitely spot-on.

Gameplay wise, Halloween Chronicles: Cursed Family pretty much sticks to the familiar HOPA formula. The adventure portion is not at all unique, but remains enjoyable. The hidden object scenes as well as the puzzles introduce some creative thematic twists, but are far from innovative. Unlike most games from the studio, this game contains no gadgets or helpers.

Big Fish Editor's Choice! This title was selected for its exceptional quality and overwhelmingly positive reviews from our Game Club beta testers.

Domini Games presents another spooky story for the Halloween season with an extraordinary new chapter in the Halloween Chronicles series!

Your parents don't talk much about whatever happened to Uncle Pierre, so when he invites you to visit his fair and meet his family for Halloween, you jump at the chance to see him again. But you're not there long before you realize that something is wrong.

Pierre was always a little odd, but not like this. His family doesn't even know what he's up to, but they're glad you're there to help solve the mystery and hopefully defeat the evil that threatens the entire town! Prepare your seeking skills and puzzling powers for this offbeat new Hidden-Object Puzzle Adventure that’s full of surprises!