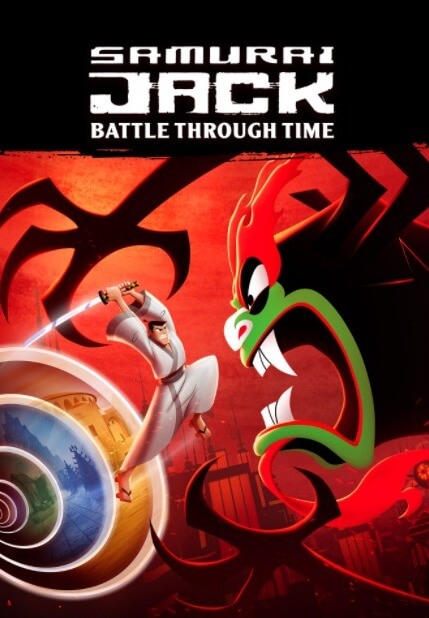 Samurai Jack: Battle Through Time is an action-adventure video game based on the American animated television series Samurai Jack. It was developed by Soleil Ltd., a subsidiary studio of the Japanese video game developer Valhalla Game Studios, and published by Adult Swim Games.

The game serves as an alternative scenario that takes place during the show's series finale in its final season. It was released on August 21, 2020 for PlayStation 4, Xbox One, Nintendo Switch, Microsoft Windows, iOS, and macOS, and received generally mixed to positive reviews from critics.

This is the first Samurai Jack video game to be released on Microsoft and Apple platforms, as Samurai Jack: The Shadow of Aku was planned for the original Xbox in 2004, but was ultimately unreleased.

The player takes control of Jack, the series' protagonist and main character, as he rescues villagers, battles Aku's minions, and ultimately searches for the time portal to take him back to his own time and find Ashi.

The game ends in a final battle with Jack's nemesis, Aku, based on the TV series of the same name from season 5 final episode. Other bosses include Demongo and a possessed Scotsman.

According to an interview, the show's creator, Genndy Tartakovsky was initially disinterested & wanted nothing to with the game, believing it was going to be a mediocre cash grab like the previous games Amulet of Time and Shadow of Aku.

However, the game's publisher Adult Swim Games were quite insistent that developer Soleil Ltd. could deliver a quality product.

After being persuaded by the publisher, Tartakovsky enlisted Season 5 head writer Darrick Bachman to keep the game's writing authentic to the series and to write around the perimeters set by the game's publisher for the developers, which was to include elements from all 5 seasons. The story isn't considered a part of season 5 by the creators, but rather more like a coda to the entire series.

Many of the voice actors of the original animated series (circa Season 5 for one case) have reprised the roles of their characters in this game.

The game released digitally on most major platforms on August 21, 2020. On August 14, 2020, Limited Run Games sold pre-orders for physical copies for non-Microsoft consoles.

The physical editions could be bought with just the game on its own or a collector's edition with the game and other physical extras like the soundtrack, a statue, a poster, and more.