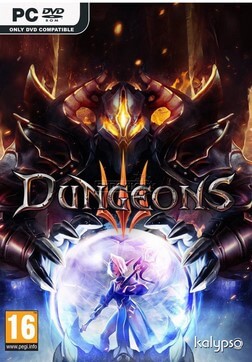 Dungeons 3 is a video game developed by Realmforge Studios and published by Kalypso Media. It was released on October 13, 2017, for Microsoft Windows, macOS, Linux, PlayStation 4 and Xbox One. It is the sequel to the 2015 video game Dungeons 2 and the third installment of the Dungeons series.

Dungeons 3 combines dungeon building with real-time strategy elements. Players are tasked with creating an underground dungeon for creatures to live in as well as defending their dungeon against invading heroes from the world above. They can also send creatures to the world above where they can take direct control of their units. The game's single-player campaign follows the story of Thalya, a dark elf sorcerer, on her quest to conquer the continent she lives on at the behest of the Dungeon Lord from the previous games. In multiplayer, players can either cooperate to play the campaign or compete against each other.

Dungeons 3 is a dungeon building video game with real-time strategy elements. The primary task is to build a dungeon, an underground lair which serves as a home to the player's units and their base of operations. In dungeon building mode, the player controls the world with a hand, performing actions such as moving creatures around the map, casting spells, and interacting with specific items. The hand is also used to designate parts of the underground for excavation and to create rooms. Commands are carried out by little imp-like creatures called snots, which are constantly regenerated by the dungeon heart which is the center of the dungeon and represents the player's health. It is the primary target for attacking heroes and its destruction leads to a game over. Additionally, the dungeon heart room stores gold and features a trap door that can be used to get rid of unwanted units.

To build and maintain their dungeon, five different resources are available: Gold is gained by excavating gold veins in the underground and is used to pay for rooms, units and new technologies. Gobblers are little chicken-like creatures continuously created by a farm and serve as food for creatures. Toolboxes are used to make traps as well as to create certain contraptions in some rooms. Mana is generated by Demon units and is used to unleash powerful magic spells as well as revive Demon units and turn toolboxes into magic toolboxes for more powerful traps. Beer is brewed by Horde units in special rooms and serves to keep those units happy. "Evilness" is a resource generated by capturing certain places in the over-world and is needed to research stronger technologies and upgrades.

With the exception of Thalya, the player's hero unit, all other units have to be unlocked by research and hired through an in-game menu. Almost all units demand a number of comforts, including a regular wage, rooms to sleep in, food and relaxation, and will go on strike if their needs are not met. The game features both neutral units and rooms, such as a treasury and farms, as well as three factions that provide their own specific advantages and disadvantages: The Horde allows the player to hire goblins, orcs and naga and provides access to training rooms and traps; Demons consist of imps, arachnids and succubi and allows the player to research upgrades as well as generate mana for spells and advanced traps; and The Undead faction offers banshees, vampires and lich creatures and rooms like a prison to incarcerate attacking heroes. Additionally, each faction has a singular powerful titan unit that can only be hired once. Even with upgrades, players can only recruit 20 units from all three factions combined as well as up to five converted heroes; additionally, undead skeletons and zombies can be created from fallen heroes that do not count towards this limit. While each faction offers their own technology tree, many aspects can be combined for better results: For example, heroes captured in the Undead prison can be tortured in the Demon torture chamber to switch sides and fight for the player and Undead crypts can serve to resurrect dead Horde creatures. Dead Demon units will be resurrected in a lair using mana and defeated Undead units will slowly regenerate in their graveyard.

While in dungeon building mode, units cannot be controlled directly but picked up using the hand and dropped where they should be, for example to attack heroes that have entered the dungeon through one of the entrances. Each dungeon features one or more such entrances that also allow units to be sent to the world above by grabbing the units with the hand and placing them on the exit. Units that leave the dungeon reappear in the over-world map. Unlike in the dungeon, players can select units like in other real-time strategy games and issue commands directly as well as use their skills. Most maps require certain goals to be achieved on this map. Additionally, some missions feature no dungeon and have to be played with a fixed number of units provided. Events on both maps happen at the same time, forcing players to divide their attention.

The game features twenty single-player missions as well as a co-op mode that allows two players to complete the campaign together. Additionally, the game contains a skirmish mode which allows battles against the computer on randomly generated maps as well as a multiplayer mode where players can compete against each other but not attack each other's dungeons (unlike in Dungeons 2). The game uses an isometric perspective that can be rotated by 90° to display the environment and uses two different mini-maps for dungeon and over-world view. Cut-scenes that tell the story use comic book style drawings instead of being rendered in the game's engine.

All games from the serie "Dungeons"