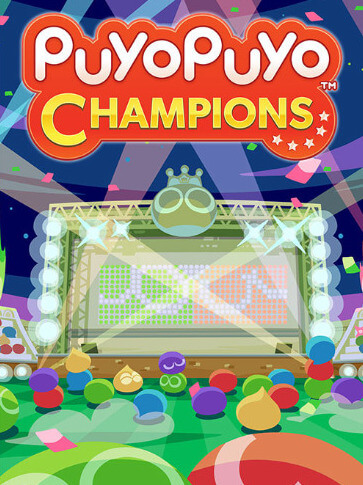 
Puyo Puyo Champions (Puyo Puyo eSports (ぷよぷよeスポーツ) in Japan), is a puzzle videogame developed by Sonic Team and published by Sega for the Nintendo Switch, Xbox One, PlayStation 4, and in 2019 for Microsoft Windows (through the Steam platform).

Originally available in Japanese under Puyo Puyo eSports, the game was localised for international release in 2019 under the name Puyo Puyo Champions. As with Puyo Puyo Tetris, the international release features English characters voices, allowing the player to change between the original Japanese and the English localised voices; the game interface is also available in French, German, Italian, Spanish, Traditional Chinese, Simplified Chinese and Korean.

The game features two separate gameplay mechanics based on the following earlier games:

The game modes available include:

Multiplayer, the main focus of the game; can be played locally on the same device or via LAN, or with other players online, casually or competitively

Tournament, a local multiplayer mode for up to eight players, featuring a single-elimination tournament

Lessons, a single-player mode for learning the basics of the game and training

Challenges, the only other single-player mode available, mainly to test players' skills and abilities

As its original Japanese name implies, this game is aimed at esports, so it lacks the single player campaign prominently featured in the previous games.

Puyo Puyo Champions also features 24 playable characters, complete with their own distinct AI behavior and Fever drop pattern, though some of these characters simply reuse the existing AI of characters not appearing in the game as playable. These characters include fan-favorites from the original Compile game series such as Arle and Dark Prince, as well as newer characters such as Ally, who debuted in the Japan-only Nintendo 3DS game Puyo Puyo Chronicles.

The game also allows players to personalize their in-game profile image, with over a hundred characters to choose from both the main game series and Puyopuyo!! Quest, as well as a selection of backgrounds and borders, all of which seem to be carried over from Puyopuyo!! Quest.

Nintendo Life says that Puyo Puyo Champions ably covers the essentials of the series at a great price point, leaving a score of 80/100.