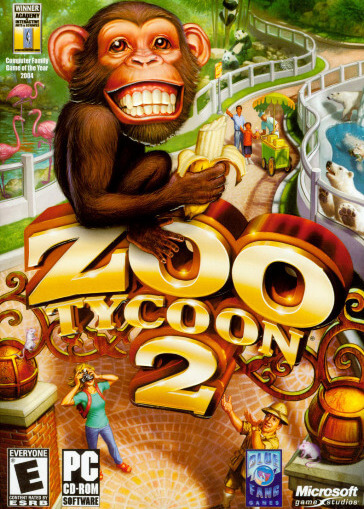 Zoo Tycoon 2 is a business simulation video game developed by Blue Fang Games and published by Microsoft Game Studios and MacSoft. Originally released for Windows, Zoo Tycoon 2 is also available for Windows Mobile, PDA, and Mac OS X, although expansions are not included in the Mac version. A Nintendo DS version, titled Zoo Tycoon 2 DS, was released in 2008.

Zoo Tycoon 2 features similar gameplay as its predecessor, Zoo Tycoon. The object of the game is to build and operate a zoo by creating exhibits and aquariums, keeping guests and animals happy, and maintaining employees, finances, terrain, and scenery.

Zoo Tycoon 2 features a number of gameplay modes, each with differing limitations, with the exception of Freeform. A Freeform game in Zoo Tycoon 2 allows the player to choose what kind of zoo to create, with the only restrictions being space, animals, and objects. The player's money supply is unlimited, and all items are available from the beginning of the game, except for those that can only be unlocked in Scenario and Challenge games. Freeform games begin with an empty zoo, to which the player adds animal exhibits and guest facilities such as restaurants and bathrooms. The player must also hire employees to staff and maintain the facilities. The player chooses a plot of land for the zoo to be built upon at the start of a new Freeform game, and each plot of land represents a different biome (the biomes are alpine, benthic, boreal forest, coastal, desert, grassland, pelagic, reef, savannah, scrub, temperate forest, tropical rainforest, tundra, and wetlands). Each plot of land is also a different size (large, small or medium).

The player must accommodate their animals with spacious enclosures, adequate food and water, animal enrichment objects (toys or items that otherwise encourage the animals to use their natural instincts, abilities and behaviors), shelters for them to sleep or gain privacy in, and environments that suit them (for example, the Bengal tiger is naturally inhabited to the tropical rainforest biome, as is the common zebra is to the savannah biome). The player must also provide for the guests, which is done by placing food and drink stands, bathrooms, picnic areas, seating, trash and recycling bins, and playgrounds around the zoo. The player can create a range of elevated and lowered terrain types, including hills, valleys, cliffs, basins and ditches.

In addition to Freeform mode, there is also a Campaign mode in which the player chooses a campaign to play through and is placed in the role of an average zoo owner and is assigned different goals to complete; these goals may include having to breed tapirs, train dolphins, and rescuing abused animals. As well, there is a Challenge mode in which the player has a limited amount of money (although the player can choose a starting amount) with which goals must be completed. Some goals are harder than others.

According to The NPD Group, Zoo Tycoon 2 was the 19th-best-selling computer game of 2004. It rose to 13th place on NPD's annual computer game sales chart for 2005, a position it maintained for 2006.

The game received generally positive reviews. IGN gave the game a 7.5/10 praising the game's lasting appeal while criticizing the game for being too easy , while GameSpy noted the improved 3D graphics.

Zoo Tycoon 2 received a "Silver" sales award from the Entertainment and Leisure Software Publishers Association (ELSPA), indicating sales of at least 100,000 copies in the United Kingdom.