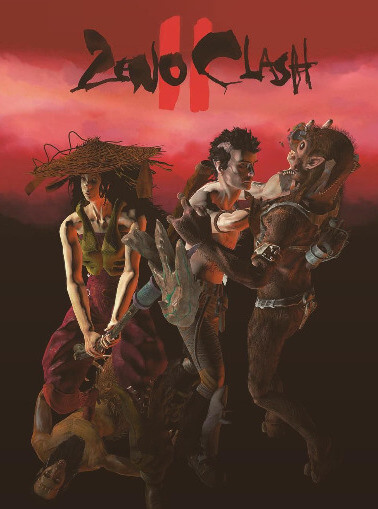 Zeno Clash 2 is a first-person action role-playing and beat 'em up video game developed by ACE Team as the follow-up to 2009's Zeno Clash. It was published by Atlus for Microsoft Windows, PlayStation 3 and Xbox 360 in 2013. The game is a direct sequel and features the same characters and setting as the first. It continues the story of Ghat, Rimat, and Father-Mother.

The game begins with the first game's protagonist, Ghat, meeting with his antagonistic sister Rimat in a bar. Since the events of the last game, the Northern Golem has established the rule of law in the previously lawless city of Halstedom. After law was established the Golem promptly arrested Ghat and Rimat's single parent, the creature named Father-Mother, for the crime of serial kidnapping.

While Rimat is furious and wants revenge against the Golem for the arrest of Father-Mother, Ghat is a true anarchist and has come to hate the Golem for taking away Halstedom's freedom and wants to kill him to restore it. Regardless of their different motives, this shared anger at the Northern Golem leads them to set aside their differences. Together they enter the newly built prison and free Father-Mother. But by doing so, they end up in the middle of a conflict between the authoritarian Northern Golem and the laissez faire but cruel Southern Golem. To free their city from the tyranny of the seemingly invincible Northern Golem, they must journey through all of Zenozoik to find a method capable of killing their near immortal overlord, even if it means playing right into the Southern Golem's plans. Along the way, Ghat and Rimat will discover the secret past of their mysterious planet.

Much like the previous game, Zeno Clash 2 is a first person brawler centered around melee combat. New is the ability to individually punch with each fist, use an array of special weapons that range from a simple chain to a glove that links enemy health together, and a semi open world instead of the mission based system of the first game. Zeno Clash 2 features a multiplayer game mode, in contrast to the first game which was only single-player. The game also includes multiple forms of Arena modes which were included in the last game, and one of these Arena modes lets you play as the Rock from Rock of Ages.

Zeno Clash 2 was released on April 30, 2013, 4 years after the original. A demo for the game was released 6 days before the game itself.

Zeno Clash 2 was met with mixed reviews, with the PC version receiving a rating of 61/100 on reviews aggregator Metacritic. The most favourable rating by nowgamer says the game bests its predecessor, praising the "sumptuous looking and stylish" world and "excellent" combat system but noting that Zeno Clash 2 may "obviously not be for everyone, and its low budget does show through." Other critics praise the artwork and characters but cite various flaws and most seem to agree that the game fell behind in comparison to the first game. Destructoid said "Zeno Clash II might be bigger than its predecessor, but it fails to be truly better."