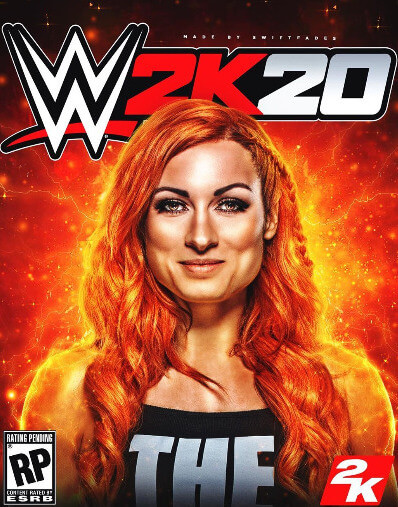 WWE 2K20 is a professional wrestling video game developed by Visual Concepts and published by 2K Sports. It was released worldwide on October 22, 2019 for Microsoft Windows, PlayStation 4, and Xbox One. It is the twenty-first game in the WWE game series (seventh under the WWE 2K banner) and the successor to WWE 2K19. WWE 2K20 is the first WWE series game to not be developed by Yuke's since the inception of the series in 2000. Instead, the game was solely developed by Visual Concepts, who had previously worked with Yuke's as co-developers since WWE 2K15.

WWE 2K20's 2K Showcase mode revolves around the Four Horsewomen of WWE (Bayley, Becky Lynch, Charlotte Flair and Sasha Banks). The 2K Towers mode, first introduced in WWE 2K19, made its return to the series. WWE 2K20 features a female MyCareer story alongside its male story, a first for the franchise.

WWE 2K20 is the first game in the series to be solely developed by Visual Concepts; previous entries were co-developed by Yuke's. Eminem was reported to be curating the soundtrack of the game early in development, but talks with the rapper fell through after the news was leaked before it was made official. The game was formally announced on August 5, 2019, with a trailer announcing Becky Lynch and Roman Reigns as cover stars. This marks the first game in the WWE 2K series to feature a female cover star (most recently, THQ's WWE SmackDown vs. Raw 2007 featured Torrie Wilson on the NTSC cover of the game), and the first game since WWE SmackDown vs. Raw 2011 to have more than one cover star.

WWE 2K20 will have four themed DLC expansions under the banner "WWE 2K Originals", which include content such as Showcase episodes, arenas, and additional character skins and accessories. The first pack, "Bump in the Night", is a horror-themed expansion centered around Bray Wyatt's "The Fiend" persona; it was included as part of the "Deluxe" and "SmackDown 20th Anniversary Edition" versions of the game, and became available for purchase on October 28, 2019.

WWE 2K20 received "generally unfavorable" reviews, according to review aggregator Metacritic. Reviewers criticized the physics, graphics, targeting, change in controls and the large number of glitches. Brian Mazique of Forbes gave it a 5.25 out of 10, saying “It feels as if this was a rebuilding year for the WWE 2K franchise." Mazique also said, "While a few of the legacy strengths such as the creation suite are still strong, the most important part, the gameplay is in a bad place." Matt Fowler of IGN gave the game a rating of 4.3 out of 10 and called it a "mess". He went on to state "WWE 2K19 looked like it stopped the downward trend for the series, but WWE 2K20 doubles back, breaks its ankle, and tumbles down the slope. Fundamental parts that felt totally fine in WWE 2K19 now feel clumsy, the impressive roster of 238 superstars is all but meaningless when a majority of them look like they crawled out of a PS2-era wrestling game, and while 2K20's MyCareer mode offers a better wrestling story mode than most previous WWE 2K games, that’s a low bar to clear – it’s still saddled with bad progression and a plodding pace. This is a mess that 2K needs to clean up in a hurry." GamesRadar+'s Ben Wilson gave it 2 and a half stars, giving the verdict "WWE 2K20 plays like a work-in-progress demo that’s yet to be stress-tested - but there’s a decent game somewhere under the hot mess." At the start of 2020, the game was rendered almost unplayable due to a "Y2k20" bug.