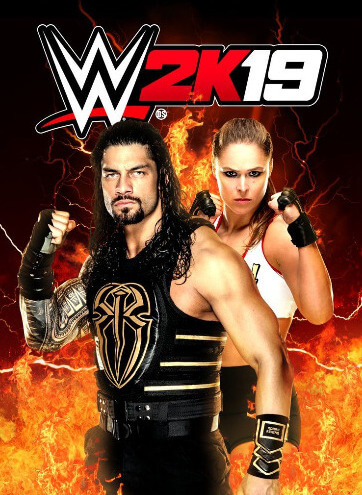 WWE 2K19 is a professional wrestling video game developed by Yuke's and published by 2K Sports. It was released worldwide on October 9, 2018 for Microsoft Windows, PlayStation 4, and Xbox One. It is the twentieth game made in the WWE game series (sixth under the WWE 2K banner), and the successor to WWE 2K18. WWE 2K19 was the last WWE game to be developed by Yuke's after 18 years of being in development within the franchise. A sequel, WWE 2K20, was released on October 22, 2019, this time being developed by Visual Concepts.

In an interview with Hardcore Gamer, WWE 2K creative director Lynell Jenkins stated that WWE 2K19 would be moving away from the simulation-styled gameplay of the last four WWE games, in favor of faster, more fluid gameplay, saying "The fans kind of got turned off by the product we were giving them and we had to think outside the box and they never thought that we’d do it. The core was simulation, and people got turned off by that and we were hearing loud and clear that they weren’t buying it anymore and that was the driving force behind all of that." He added "We were hearing from the fanbase that it was too slow, too sluggish and it wasn’t any fun anymore."

WWE 2K19 features many different returning and new game modes, including the 2K Showcase Mode, focusing on the career of Daniel Bryan. This is the first Showcase to be featured in the series since WWE 2K17's Hall of Fame Showcase DLC. Players take control of 11 different unique models of Daniel Bryan, in 11 matches, including his Velocity match against John Cena.

Two new "Tower" modes are present in 2K19. In MyPlayer Towers mode, wrestlers or created superstars can participate in challenges online or offline. Daily, Weekly and Pay-Per-View challenge towers are also introduced. In WWE Towers, There are two types of Towers including the Gauntlet Tower, where players must complete the Tower entirely in one session. Losing a match or quitting resets the progress to square one. In the Steps Tower, the players' progress is saved after each match, so they can play at their own pace.

MyCareer mode has been reinvented with the focus of a more linear storyline that centers the player's created character as an aspiring wrestler, working his or her way up from independent wrestling promotions to the WWE. Barron Blade, a fictional character featured in previous MyCareer modes, also returns and acts as the created player's guide.

The Road to Glory mode returns from previous entries, with the ability to now join one of eight different factions.

On June 15, 2018, 2K announced WWE 2K19. On June 18, 2018, 2K held a press conference, with AJ Styles being announced as the official cover star for the video game; as well as the announcement of the "WWE 2K19 Million Dollar Challenge", in which players must beat the million dollar tower in the new towers mode and submit a promotional video, after which four semifinalists will be selected. The semifinalists will compete in a tournament to determine who will face Styles for the million dollar prize.

On July 25, 2018, 2K revealed that they will featured the WWE 2K19's Collector's Edition that would be based on Ric Flair, titled the "Wooooo! Edition". Similar to some of the previous games; it includes a Deluxe Edition copy of the game and access to the game four days early and the Season Pass alongside other physical features, including a plaque featuring a fabric piece from Flair's pink or purple robe. In-game features include the access to pre-order bonus characters Ronda Rousey and Rey Mysterio; as well as a 2002 version of The Undertaker, Ricky Steamboat, Roddy Piper, Dusty Rhodes and Randy Savage, Flair's WrestleMania XXIV robe and his daughter, Charlotte Flair's WrestleMania 32 robe as in-game attires, and the 1983 Starrcade arena.

Over three weeks in August and September 2018, 2K streamed roster reveal videos on their YouTube and Twitch channels, hosted by Rusev and Lana with a different tag team as guests each week; The B-Team (Bo Dallas and Curtis Axel) the first week, Luke Gallows and Karl Anderson the second week, Cesaro and Sheamus the third week. On September 13, 2018 2K released the official gameplay trailer, showcasing several new features such as Big Head Mode, a zombie version of Triple H, and Bray Wyatt's House of Horrors match location. One week later, the soundtrack was revealed in a livestream hosted by The New Day, alongside Elias and rapper Wale. Each song on the soundtrack was chosen by a WWE wrestler and includes popular artists such as Eminem, Post Malone, Metallica and Fall Out Boy.

The game was nominated for "Fan Favorite Sports/Racing Game" at the Gamers' Choice Awards, and for "Sports, Racing or Fighting Title of the Year" at the Australian Games Awards.

IGN rated 2K19 a 7.3 out of 10, saying, "It's still held back by a number of longstanding issues. But with the much improved MyCareer mode, and the sheer amount of content available thanks to the return of Showcase Mode and the addition of 2K Towers, it stops the downward spiral of the series and puts it back on track."