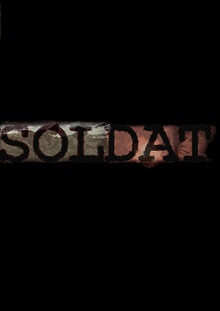 Soldat is a 2D multiplayer video game for Microsoft Windows. It is a run and gun game influenced by Liero and Scorched Earth, combined with elements from Counter-Strike and Worms.

In Soldat, the player controls a small customizable soldier who possesses jet boots. These boots allow the soldier to fly for a relatively short time, before needing to automatically regenerate their fuel. The amount of flying possible at a time, and fuel regeneration rate, both depend on individual maps. The game is normally played over the Internet or a LAN, but it is possible to play offline against bots. There are a variety of game modes to choose from, ranging from the popular free-for-all (Deathmatch, Rambomatch, and Pointmatch) to the team-based (Capture the Flag; Infiltration, Teammatch, and Hold the Flag). In some modes holding or defending a flag is the primary goal, where in others it is simply to obtain the most frags, with minor objectives (for example, Pointmatch sports a yellow flag which doubles its bearer's points). The most popular game modes are Capture the Flag and Deathmatch.

For all game modes, the basic objective is to kill enemy players. Upon spawning, the weapons menu is displayed and the player may pick from an arsenal of weapons. Frag grenades are also supplied by default and more can picked up from boxes laying around the maps ("Grenade Kit" or "Nade Kit" respectively). Jet boots are used to move around the maps, which typically consists of 2-3 levels/floors, or disorganized, floating boulders. Some servers enable temporary-lasting power-ups that grant multiplied damage (Berserker), invisibility (Predator mode), a flamethrower along with temporary invincibility (FlameGod), or Cluster Grenades (which temporarily replace regular grenades with three of more powerful, modified versions) or even a Bulletproof Vest (effectiveness of the vest depends on the distance from the firer of the bullet, and the vest slowly decreases as it soaks up damage, disappearing after absorbing a certain amount of damage, though there is no time limit). Health crates (known in the game as "Medikits") are available in many locations for healing injury back to 100% no matter how much a player is injured. Upon death and after waiting for a server-specified amount of time (on average 5 seconds), players re-spawn and may choose another weapon—this cycle repeats for the duration of the map, unless Survival Mode is enabled (in which case a spawning system similar to Counter-Strike is used). After a certain allotted time (on average 15 or 20 minutes), the map changes and scores are reset as players continue in another round. Players can chat with each other throughout matches (and to their own teams, for cooperative team-based game modes).

Most games are fast-paced and chaotic. Bodies often explode in a spectacle of blood and body parts, sometimes being hurled clear across the map. Besides its ragdoll physics, the game's engine, written in the Borland Delphi programming language, employs realistic concepts such as momentum and gravity. Fall damage and recoil are also taken into account when Realistic Mode is enabled, and supply crates, dropped weapons, and grenades realistically tumble down steep hills; another effect is the flag's realistic waving as a player runs with it.

There are ten primary weapons and four secondary weapons to choose from. A total of any two weapons may be held at any given time. Players can drop their current weapon and pick up others from defeated enemies. It is also possible to create server-specific weapon mods. The choice of weapon is largely dependent on the type of map, preferred tactics and weapons choice of the players' enemies.

Soldat aims to create balance between all of the weapons (also known as Weapon Mod), in order to make all weapons viable. A lot of tweaking was done (and is done until today) in order to achieve this goal. The matter of the weapon mod is quite controversial. This has led to the existence of an entire section of the official community message board devoted to discussion about the weapons' game balance.

Soldat is one of many games in which bunny hopping is possible. A player can travel much faster if he or she skips along the ground via frequent leaping, and often players who do not bunny hop are left behind. However, even when bunny hopping, a basic maximum speed limits horizontal movement. In addition, leaping before thrusting substantially boosts horizontal movement, as the leap gives horizontal push while the jet boots must only manage the player's vertical ascent.

Maps in Soldat are 2D arenas, most being tailored to fast-paced game-play. Deathmatch maps are shared with Pointmatch (PM), Rambomatch (RM), and Teammatch (TM or TDM, for Team Deathmatch) gamemodes, whereas Capture-the-Flag (CTF), Infiltration (INF) and Hold-the-Flag (HTF) have their own sets of specialized maps. There are currently 97 default maps in the game for the different game modes.

Every map consists of numerous textured polygons carefully positioned in relation to one another. Unlike Liero, a major inspiration of Soldat, landscape is non-deformable, though it can be interacted with in other ways. Scenery, such as bushes and sandbags, may conceal players and aid in camping and sniping. Polygons can be given special attributes to simulate lethal death pits, icy terrain, health-regenerative platforms, and more. Weather effects (snow, rain, and sandstorm) are used on some maps. Some servers enable the powerful stationary M2 turret specified by particular maps (usually CTF and INF) which players can man.

There are several known programs for mapping. The original map editor program is MapMaker 1.2, by Michał Marcinkowski himself. It has a unique control scheme that includes using the right mouse button to navigate the map and the control, shift, and alt keys combined with the left or right mouse button to perform functions. Another popular Soldat mapping program is PolyWorks, which has a different control scheme and a much more complex interface.