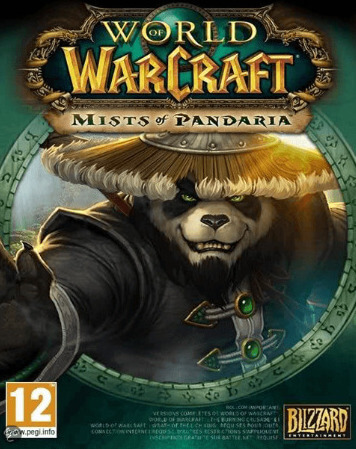 World of Warcraft: Mists of Pandaria is the fourth expansion set for the massively multiplayer online role-playing game (MMORPG) World of Warcraft, following Cataclysm. It was announced on October 21, 2011, by Chris Metzen at BlizzCon 2011, and was released on September 25, 2012.

Mists of Pandaria raised the existing level cap from level 85 to 90. It introduced a new character class, the monk, along with a new playable race, the Pandaren. The vanity pet system was overhauled and a pet battle system was added. Scenarios were introduced, and Challenge Modes were added for dungeons. The existing talent trees were replaced by a new system of tiered talents awarded every 15 levels. The initial patch included nine new dungeons, three new raids, two new battlegrounds and one new arena. Subsequent patches introduced the Brawler's Guild and heroic versions of the scenarios. Several additional raids, dungeons, a new battleground, and a new arena were also added.

Monks use an energy source to power basic abilities like Jab. The basic Jab attack is used to generate a resource called "Chi", which are then used for more advanced attacks. The monk class was originally announced with not being able to utilize an auto-attack like the other classes, however, the developers chose to forgo this idea and they have been given an auto-attack. The monk class has three specializations: Brewmaster (tanking), Windwalker (melee damage), and Mistweaver (healing). Monks' healing specialization is capable of healing allies through dealing damage to enemies, as well as through "proximity" based heals, and by dropping statues, similar to a shaman totem, that pulse healing as they perform attacks on the enemy target. Choosing the healing specialization gives the monk a mana bar like other healers while the tank and damage spec uses an energy bar. Monks make use of leather armor, and every race except goblins and worgen may play as a monk. An 11th character slot was added on the release of Monks, allowing a player to have one of each class on the same server.

In the Legion expansion, Mistweaver monks lost the Chi resource and the Fistweaving talent that allowed them to heal by dealing damage. This converted Mistweaver monks into a standard healing class that directly heals allies through the use of a mana resource bar.

The pandaren—a race of anthropomorphic giant pandas initially created by veteran Blizzard artist Samwise Didier as an April Fools style joke—were later reintroduced to the Warcraft canon in the bonus Horde campaign of Warcraft III: The Frozen Throne. Unlike previous races in World of Warcraft, which are tied to either the Horde or Alliance in-game factions, pandaren are faction-neutral for the early levels of the game. Until the end of the principal quest line on the Wandering Isle, the pandaren player character is faction-less; at the end of their starting experience, the player chooses to align with either the Horde or the Alliance. The pandaren speak both the pandaren language (though the factional language barrier will still remain between Horde and Alliance pandaren) and the main languages of their faction, which are Common (Alliance) and Orcish (Horde). (In an interview with Kat Hunter, Chris Metzen jokingly said the languages had not yet been chosen but Pig Latin was a strong candidate.) The classes available to pandaren characters are Hunter, Monk, Mage, Priest, Rogue, Shaman and Warrior.

In 2011 it was revealed that the new instances would include Temple of the Jade Serpent, Stormstout Brewery and Shado-Pan Monastery. It was later revealed that the 4 parts of Scarlet Monastery – Library, Graveyard, Armory and Cathedral – would be merged into two heroics in Mists of Pandaria. A heroic version of Scholomance was also announced. During the Mists of Pandaria press release, it was announced that there would be nine level 90 heroics for players as well as three raids with 16 raid bosses. All of the raids have three difficulties (Heroic, Normal, and Looking for Raid).

Mists of Pandaria introduced Challenge Modes, a gameplay option where a dungeon group is challenged to finish a dungeon of increased difficulty as quickly as possible. All players' gear is normalized, allowing for fair ranking. Depending on how quickly the group clears the dungeon, the group will earn one of three possible medals. The higher the medal quality, the higher the prize for achieving that medal.

Introduced with the expansion, the pet battle system allows non-combat vanity pets to be pitted in battle against each other in a turn-based combat system, either against wild pets or other players' pets. Defeating wild pets allows players to capture them, adding to their collection and their pet journal. Pets can be trained up to a maximum level of 25, with new abilities and enhanced stats granted as they progress. Players are able to seek out master pet trainers and battle their pets, with daily rewards if the player defeats them. All information regarding pet levels, abilities, and battles is tracked in the Pet Journal.

There are 10 possible pet classes, each with their own strengths and weaknesses.

Mists of Pandaria also included a new 3 player instance mode, called Scenarios. Playable on either normal or heroic difficulty, they are short stories players can play through and earn rewards at the end. The stories are mostly relevant to the Horde and Alliance storylines in Pandaria. Scenarios have different stages, and the players receive different tasks for each stage. During a heroic scenario, the players can attempt to complete a timed objective for an extra reward. The scenario mode doesn't require anyone to queue as a role, and it's up to the group what composition they want to run with.

In patch 5.4, a new raid setting was introduced with the Siege of Orgrimmar raid, called Flexible. In it, players would assemble a premade group of 10 to 25 players, and the difficulty of the raid would automatically scale accordingly. This setting is intended to be more challenging than the Raid Finder setting, but not as difficult as the Normal or Heroic modes, and groups can be formed across realms (cross realm group forming was later added for normal and heroic difficulties).

(0) Comments on "World of Warcraft: Mists of Pandaria Full Version"